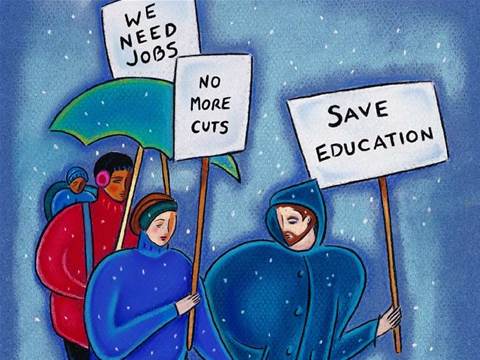 Unions representing Telstra employees have rejected a deal offering a nine percent pay increase over a period of three years.

The deal included a sign-on bonus with the potential for performance bonuses.

The Community and Public Sector Union, one of the three unions representing Telstra employees, said on Friday that it had held over fifty meetings around the nation with its members.

The union told members that it had sent a "strong and clear message" to Telstra management that the current enterprise agreement offer was "not good enough".

Another of the unions representing almost eighty percent of Telstra's employees, the Communications, Electrical and Plumbing union, agreed.

Branch organiser of the New South Wales branch, Shane Murphy, told iTnews the group had met Telstra at a stalemate.

"Negotiations at this point in time are pretty much coming to a stalemate and progressing very slowly," Murphy said. "We've pretty much got agreement on most of the issues but we're tied down to three issues:  the pay offer, the key job descriptions the guys work under and the dispute resolution procedure," he said.

Murphy said that if the unions could not reach an agreement in the "not too distant future" they'd be considering "all available options" including their ability to bring on industrial action against Telstra.

Murphy said this could include strikes.

"We'll be seeking to re-engage [with] our members to try and put some further pressure on Telstra to finalise the agreement through industrial action," Murphy said. This would include "withdrawing the labour of workers across Australia in key areas".

He also accused Telstra management of trying to "de-unionise" the company by offering employees better pay if they were to leave their chosen union.

Pay increases reached almost 12.5 percent for employees opting to not be a member of a union.

"It's clearly not anywhere near the mark of what they've originally offered on non-union deals early this year with a back dated agreement," Murphy said.

"When the workers chose not to [leave their union], for certain reasons, they're now offering similar type arrangements with lower pay rises on the union agreement," Murphy said.

The ultimate outcome for the unions would see Telstra put an offer on the table in line with what was offered in non-union agreements, Murphy said. The agreement would also need to include better job descriptions and a dispute resolution procedure, which wasn't offered to employees who were offered to leave the unions for a better pay.

"In the next couple of meetings we have scheduled with Telstra senior management in Melbourne that they come to the table with open minds, look to sort the agreement out, offer a fair and reasonable pay rise, sort out the remaining three items and be happy to put the agreement to workers," Murphy said.

Murphy said there is little hope of a resolution.

"With the number of meetings that we're having at the moment we certainly don't think, unless Telstra have had a change of heart, there's too much light there," he said.

Negotiations will continue this week.

"Telstra has put a fair pay offer on the table at a time when many companies are freezing pay," the spokesman said.

"We have proposed a pay increase package totalling eleven percent for enterprise agreement employees over three years - 2 percent increase plus up to 2 percent sign on bonus for the first year, 3 percent increase for the second year and 4 percent for the third year - plus an annual performance bonus for top performers of up to 2.5 percent each year and the introduction of full salary packaging benefits, including $1000 per year towards Telstra products.

"We believe this is a good offer, taking into consideration the unprecedented downturn the global economy has experienced," the spokesman said.

The spokesman also said that "under the same economic constraints we completely froze pay increases for executives" and said it would continue to work towards finalising an agreement that was "equitable for both our employees and our business".

"Negotiations have generally been constructive and we are focused on finalising a fair agreement," the spokesman said.