Surface Mini may still be coming 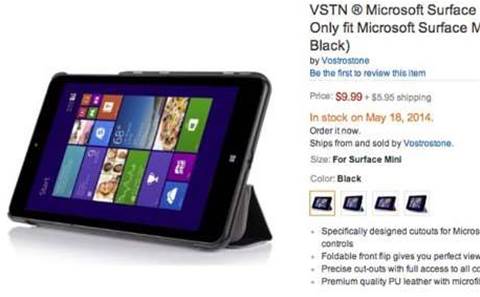 Probably the most surprising thing about Microsoft’s 20th May Surface event was that only one new model, the Surface Pro 3, was unveiled. For weeks before the launch, the tech rumour grapevine had been assuring everyone that Microsoft had not one but two new tablets to show off: a new Pro and a smaller, cheaper Surface Mini. But the Mini didn’t appear.

Why not? According to Neowin, the Surface Mini was pulled from the event at the last minute – or more precisely in days leading up to it, a “management directive” decreeing that it should be kept back from the public. The report claims this decision was made so late on that Microsoft had already produced between 15,000 and 20,000 Surface Minis – all of which are presumably now gathering dust in a lockup somewhere.

HELD BACK UNTIL THE AUTUMN?

Neowin has heard two reasons for Microsoft’s dramatic change of heart regarding the Surface Mini. One is that management felt that the tablet doesn’t offer enough “differentiating features” over what’s out there already (a criticism you certainly couldn’t level at the Surface Pro 3); the other is that Microsoft is sitting on it until a touch-friendly version of Office is ready, which will most likely be this autumn.

The suggestion is that the Surface Mini will eventually get its launch, but that Microsoft feels that showing it off too before it’s truly noteworthy would have attracted too much criticism and damaged its appeal. The smart money is on a launch later this year. We’ll keep you informed of any more developments to this story.