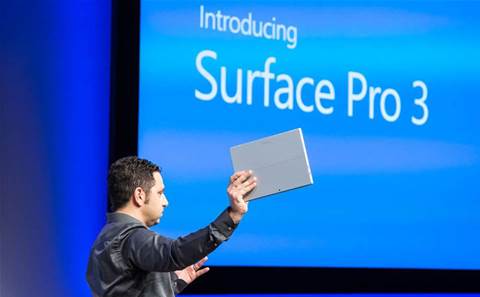 Microsoft's controversial decision to restrict the channel for its Surface device still rankles with resellers and is prompting some clever – and conflicting – workarounds.

Earlier this month, Microsoft announced that a discount "Surface laptop replacement bundle" would be available through its authorised resellers, which reignited the debate over Microsoft's decision to leave the rest of the channel out in the cold.

Dennis Evans, owner of Dennis' Computers and Backup Service in Queensland, told CRN of a recent conversation with a Microsoft rep about a laptop replacement project for an education client.

"She asked me to push the Surface Pro 3, as we were replacing 120 notebooks. I explained to her that I was not allowed to sell the Surface Pro – and she said she could arrange for one of the 14 resellers to contact the school."

Evans said that he was "gobsmacked" by this suggestion and asked how his business could make a margin out of such an arrangement: "She said, 'You have to do what is right by the school.'"

"I promptly told her I [would supply] Toshiba notebooks, for which I can sell, support and supply the warranty," said Evans.

Sydney's NetCare IT is both a Microsoft and Apple partner, so when clients actively seek out the Surface, the company offers them the iPad instead.

"We often cross-sell them to the iPad, which as an approved Apple partner, we can provide and make a margin," said managing director Darryl McAllister.

"On occasion, for specific Windows-only application requirements, we've resorted to purchasing Surface tablets from Staples and then reselling them at no margin to our managed services clients.

"It is frustrating to me that as a long-term [Microsoft] partner with silver status that we cannot have resale access to the Surface tablet," he added.