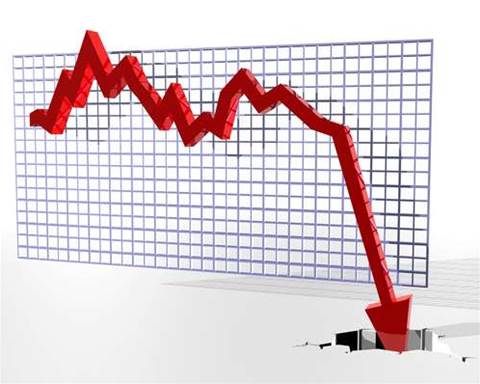 Microsoft's latest set of quarterly results show that its ARM-based tablet offering, the Surface RT, has failed in the market, leading to a massive write-down.

While results for the three months ending June 30 this year were generally positive for the enterprise side of Microsoft, the company booked a US$900 million (A$981.5 million) "inventory adjustment" for Surface RT.

Analysts IDC estimated Microsoft had sold around 900,000 Surface tablets, but most of those were the fully Windows software compatible Pro variety, which features an Intel processor. This week, Microsoft lowered the price of the device by thirty per cent to A$389.

A large US$733 million (A$799.5 million) fine levied by the European Commission for failing to implement a choice of default web browser for Windows customers more than offset US$540 million (A$590 million) in deferred revenue from the Windows Upgrade Offer, the company reported.

"While our fourth quarter results were impacted by the decline in the PC market, we continue to see strong demand for our enterprise and cloud offerings, resulting in a record unearned revenue balance this quarter. We also saw increasing consumer demand for services like Office 365, Outlook.com, Skype, and Xbox LIVE,” said Amy Hood, chief financial officer at Microsoft.

Business division revenue grew by 14 per cent in the last quarter, and the server and tools division by nine per cent, with the latter experiencing strong sales of SQL Server and System Centre, Microsoft said.

The Windows division however saw its operating income more than halve in the last quarter, from US$2,422 million for the same time last year to US$1,099 million.

Overall, Microsoft hauled in US$19.89 billion in the fourth quarter with earnings of 59 US cents a share, missing analyst targets of US$20.73 billion and 75 cents per share earnings.

Grabbing the hybrid cloud opportunity with Lenovo and Azure Services
By Juha Saarinen
Jul 19 2013
8:08AM