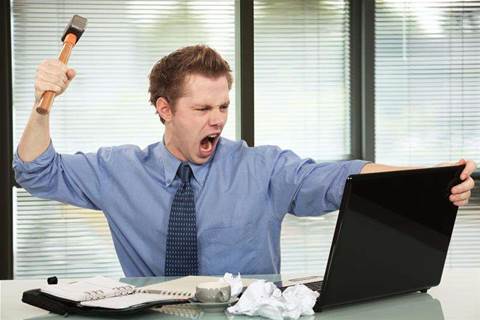 Symantec partners looking to land a major corporate deal have to bring their 'A' game to negotiations and show the vendor they are ready for the enterprise market, Symantec's channel chief says.

Resellers often complain of closing in on a major deal, only to have their vendor partner's direct sales team snatch it away. While not promising that all dealings with Symantec will be problem-free, Randy Cochran, vice president of channel sales for the Americas, said the company's policy is to use the channel where ever possible.

"There are no guarantees in business to start off with, so let's start there," Cochran said during an interview this week at XChange Solution Provider 2012 in Los Angeles. "But it is Symantec's intent, it's our desire, to work with and through partners."

Symantec, which reported $US6.2 billion ($A5.9 billion) in revenue last fiscal year, does less than 20 percent of its business through direct sales with the majority in the enterprise market. The company's enterprise reps have about 45 accounts each, focusing on roughly a third, and react to requests for proposals from another third and ignore the rest, Cochran said. "There's no way one rep can know everybody in an account times 45."

As a result, Cochran believes there's lots of opportunity for resellers who want to target enterprises with products they don't already have, such as backup, archiving, encryption and user authentication, as well as security. "There's plenty of opportunity in the enterprise space. Plenty," he said.

While there's lots of potential profit, resellers have to be ready to handle the whole deal, including product presentation, architectural design, installation, taking the order and billing. "As I tell the channel partners, you want to play in that space that's fine. You can. You just need to bring your A-game," Cochran said.

Symantec has roughly 650 large enterprise accounts, and about a third sign deals through resellers, such as SHI and Forsythe.

"You've got to technically be very sound," Cochran said. "I hate to say this, but there's got to be a reason why we would work with you, why the customer is requesting you to do it."

Symantec has had experience in dealing with a grumbling channel.

In 2010, Symantec shifted to a partner-led consulting services model in order to reduce channel conflict by clearly defining boundaries between Symantec and partner professional services. Last year, the company launched its CloudSmart program to guide partners to profits in selling cloud services.