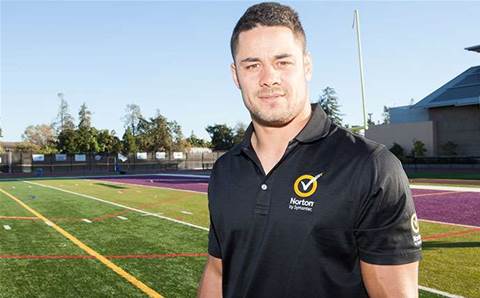 Former NRL star and current NFL player Jarryd Hayne has started his stint as an ambassador for Norton by Symantec with the presentation of a $123,000 cheque to mental health organisation Beyondblue.

The security vendor on Tuesday announced the relationship with the code-hopping athlete, who quit the National Rugby League at his peak last year to pursue a new career in the United States playing professional American football.

In the last two months Hayne has attracted attention on both sides of the sporting globe, signing with the San Francisco 49ers and so far playing four out of four games this season.

"Being so far away from home, the internet and social media is a great way for me to keep in contact with my family, friends and supporters, and stay informed about what’s happening in Australia," said Hayne. "I want the internet to be a safe place for everyone and I'm pleased to be partnering with Norton to raise awareness about online security and cyberbullying issues."

Symantec announced that Hayne's first task as ambassador was to present a $123,000 donation from the company to Beyondblue. The money will help the mental health charity's work combating cyberbullying. 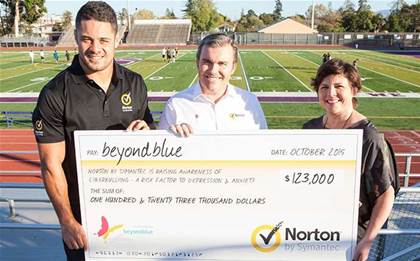 "We often don’t realise how detrimental cyberbullying can be until it's too late and I hope my involvement, in Norton's cause, will encourage anyone experiencing cyberbullying to seek help," said Hayne.

"It's important we look out for each other, both in the physical and online world, and try to tackle cyberbullying to help improve and potentially save lives."

Norton has supported Beyondblue since 2013.

"This donation will help people to find Beyondblue information about what to do if they feel threatened online and how to support their mental health," said Beyondblue chief executive Georgie Harman. "Beyondblue's work is increasingly being carried out in the digital world, which makes our partnership with Norton more important than ever."