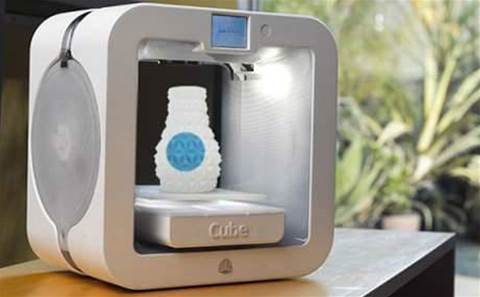 Synnex Australia has struck an agreement with 3D systems, making it the first major IT distributor to offer 3D printers direct to the channel.

As part of the agreement, Synnex will carry 3D Systems' third generation Cube 3, a compact personal 3D printer with dual colour printing suited for home use.

Along with the Cube 3, Synnex will also supply the Sense 3D scanner, a portable 3D scanner allowing users to scan real-world 3D objects in seconds for 3D printables.

"There is no doubt that 3D printing represents an exponential growth opportunity for the channel," said Jay Ko, product director for Synnex Australia.

"As consumer and personal 3D-printing applications have continued to grow in the last few years, more and more awareness of the technology has driven a huge influx of competition to the market."

Ko adds 3D is "the next big thing in printing". The move to work with 3D Systems comes as the distie sought out a big name vendor with products offering the best features and value for customers, according to a statement.

"This is just another example of our continued investment for growth, and particularly into a new era in the print industry."

Vice president and general manager of consumer products at 3D Systems, Rajeev Kulkarni said: "Synnex has been a key partner for us in North America with its reputation in the print products industry, and we are excited to expand our reach together with Synnex Australia."

Cube 3 stock will be available through Synnex select national retailers and authorised resellers from July 2014.

Grabbing the hybrid cloud opportunity with Lenovo and Azure Services
By David Raghavan
May 29 2014
12:12PM