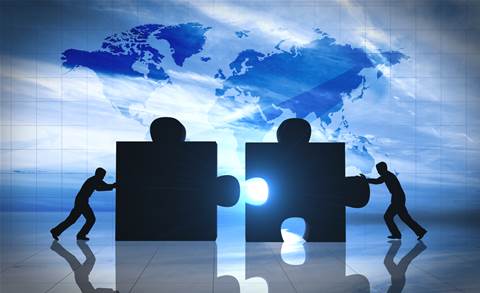 Two of the world’s largest IT distributors will join forces to create a USUS$57 billion giant with more than 150,000 customers and 22,000 employees.

The proposed USUS$7.2 billion merger of publicly traded Synnex and private equity owned Tech Data will be led by Tech Data CEO Rich Hume, (pictured) with Synnex President and CEO Dennis Polk serving as executive chair of the company’s board. The combined company will be 55 percent owned by Synnex shareholders and 45 percent owned by Apollo Global management, which bought Tech Data for USUS$5.4 billion in June 2020.

“This is transformational for Tech Data, Synnex and the entire technology ecosystem,” Hume said in a statement. “Together, we will be able to offer our customers and vendors exceptional reach, efficiency and expertise, redefining the experience and value they receive.”

Synnex’s stock is up USUS$11.80 (11.43 percent) to USUS$115 in pre-market trading Monday, which is the highest the company’s stock has ever traded since going public in November 2003. The merger announcement didn’t disclose what the combined company will be called.

Synnex and Tech Data will create the world’s largest IT distributor through their merger, coming in nearly USUS$10 billion larger than Ingram Micro, which had USUS$47.2 billion in sales in 2019. The merger is expected to close in the second half of 2021, and generate USUS$100 million of optimization and synergy benefits in the first year after closing and some USUS$200 million by the end of the second year.

The combined company will support more than 1,500 vendors and OEMs and serve customers in more than 100 countries across the Americas, Europe and Asia-Pacific regions. Prior to the deal, Clearwater, Fla.-based Tech Data had a global presence – including a particularly large footprint in Europe – while Fremont, Calif.-based Synnex was focused on North America and Japan.

“This transaction allows for accelerated revenue and earnings growth, an expanded global footprint, and the ability to drive significant operating improvements while continuing to create shareholder value,” Polk said in a statement. MiTAC Holdings Corp., which with its affiliatates owns approximately 17 percent of Synnex, has agreed to vote its shares in favor of the transaction.

This is Tech Data’s second attempt to consolidate the IT distribution industry, coming four years after the company purchased Tempe, Ariz.-based Avnet’s Technology Solutions business for USUS$2.6 billion to combine broadline and specialty distribution. Two-and-a-half years after the Avnet deal closed, Apollo agreed to take Tech Data private. The company had been publicly traded since May 1986.