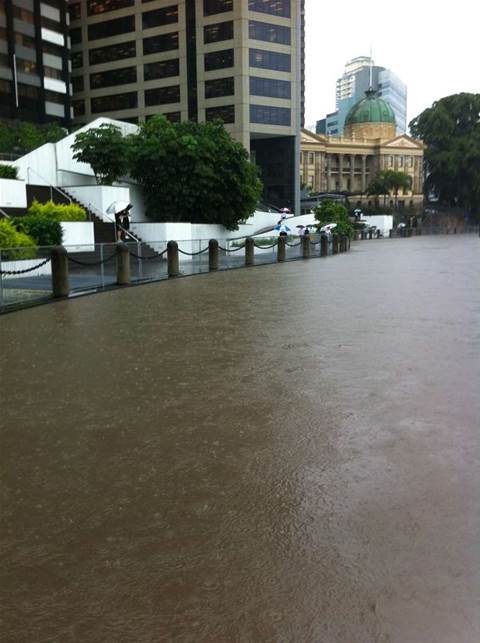 Synnex has avoided any flood damage to its Brisbane warehouse following lower than expected peaks of the Brisbane River. It's branch will re-open Friday.

Synnex and Altech have closed their Brisbane offices with Synnex's warehouse under a "minor" flood damage threat.

"If it does we're confident it will be low damage. We'd already made preparations, thanks to the advanced warnings.

"But, they're saying it will be worse than the 1974 floods. And, since we're in a new area, which would've been bushland then, we don't really know.

Salata offered his support to resellers: "I hope they all come through unscathed," he said.

Jason Hicks, Queensland sales manager at Altech Computers, said, its Darra-based Brisbane office and warehouse was "ok" and not in any danger.

"But, we have closed the office this afternoon so staff can be with their family and help friends move out of danger or render assistance to volunteer efforts around the city.

"Couriers are either not running or unable to deliver so we offered pickup services to our customers this morning," he said.

"Anyone without facilities is going to be impacted," he said. The distie that uses air freight exclusively says customers should "expect delays getting freight into Queensland".

5pm: CRN can confirm that system integrators Data#3, Dimension Data and Datacom have closed their Brisbane offices. Phone lines have been diverted for all except Datacom where callers can leave a message.

Express Data and Avnet Technology Solutions have closed their offices as the breaks its banks.

Express Data, located near the river in the suburb of has diverted phone lines  to Sydney, Peter Masters told CRN.

“All personal and sales numbers remain the same," Masters, the distie's director of marketing and operations at Express Data, told CRN.

“We have made plans up there. We can distribute staff regardless of the weather. We use all the technology for remote access.

“Like everyone else, we’re waiting on information. We’ll be affected the same as everyone else. We can’t predict how much the river will be a problem."

Avnet has sent home all 15 staff at its office in Bowen Hills two kilometres from where evacuations were taking place since mid-morning.

Paul Sadler, itX marketing manager said its office is in the CBD was “not in any danger at this stage”.

“But we’ve given our staff the option to go home, especially if they need to protect their property. Our branch manager is monitoring the situation and will close the branch if necessary."

“We have some people working from home but everybody is fully contactable. We’ll be ensuring if that changes that reseller partners know who to contact and reach out to.”

Cleary said Ingram Micro has contingency plans to send out products to resellers in need: “I can’t give any more detail because it’s quite specific in terms of working with individual reseller partners".

"We’ll do everything we can to help our resellers during this time.

“We’re very concerned for the residents of our reseller partners and in deed our own employees."

Ingram does not have a warehouse in .

“One of the things that we’re doing we will have a "Casual for a Cause Day" next week and all donations from our employees will go to flood appeal,” Cleary said.

Dimension Data’s acting chief operating officer Rodd Cunico told CRN it has initiated its business continuity plan and all staff can continue working remotely but the focus is on their safety and wellbeing.

“We’re in the midst of supporting clients through disaster recovery services. Right now most of our clients are dealing with the same thing as us and that’s focusing on the wellbeing of staff.

“In the coming days we’ll see priority shift to the reestablishment of business,” he said.

"We’ve pulled together a national team of a dozen people from across our business to start and prepare support for those customers as we move from flood to mud."