Tassie's Bartlett moves back into IT 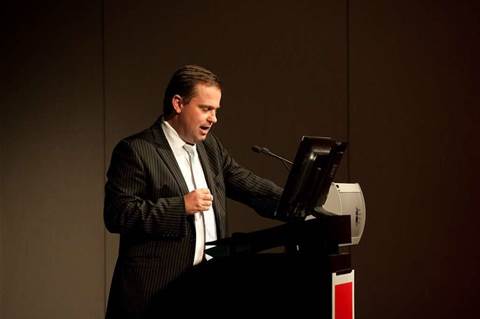 Bartlett, who stood down as Premier in January and quit politics in May, established the new company with his one-time senior policy adviser Mike Nermut, in hopes of developing a secure middleware layer between corporate IT infrastructure and consumer devices.

The Asgard Labs website described the forthcoming middleware layer as providing information to iPads and other personal devices "safely and securely" without the need to rebuild the business process or corporate IT back-end.

The software would make corporate information available on "any device", according to the company's website.

Bartlett declined to reveal how the software would work or whether it would use VPN access, but said the company wasn't looking to establish another cloud service.

He said the suite would allow access to corporate information from consumer devices in a way not currently achieved by competitors like Citrix.

"We think there's an enormous space opening up," he said.

"When Mike was working for me, we were sitting in the back of my car and were both on our iPads and I said 'wouldn't it be great if I could get my question time briefs and my other documentation I want when I'm in Parliament on my iPad?'

"What I ended up doing was copying and pasting these things to the cloud or Evernote or Dropbox, which obviously has security implications."

The issue has become increasingly important in the wake of the BYO computing trend, with fears users could walk out with corporate information on their personal device.

Bartlett said he expected a first release of the product to be out within four months.

Although Bartlett only joined the company as chairman in the last month, Nermut began building the company and software architecture when he left Bartlett's office in November last year.

Nermut has previously sold two startups to UXC and Pearson LSE for at least $10 million each.

Based out of University of Tasmania campus in Hobart, the company currently employs two programmers with plans to move to six new employees over coming weeks.

Asgard Labs was consolidated and a board formed in the past month, with Bartlett as chairman and Nermut managing director.

Prior to entering politics in 2003, Bartlett held several positions in government IT including CIO of the state Department of Health and Human Services.

Bartlett said Asgard would be his main directorship for the time begin, but he expected to have at least two more ongoing positions at other companies in coming weeks, describing one as "regional economic renewal underpinned by broadband".

He has been reportedly discussing a post at Griffith University in Queensland.