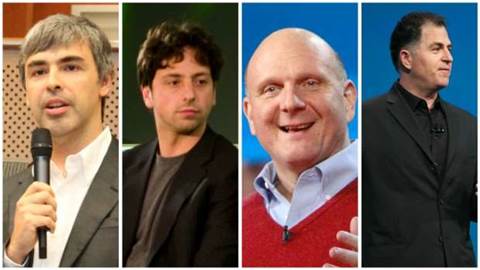 Forbes' annual analysis of America's most wealthy people is upon us, and it's striking just how tech-heavy the whole thing is. Four of the top five names in the list made their fortune through the kind of thing that we at Alphr like to follow on a daily basis.

Top of the list, for the 23rd year running, is Bill Gates. With a net worth of US$81 billion (A$105 billion), he's pretty much unassailable, even as he tries to give much of his wealth away in the fight against malaria. I say unassailable, but Jeff Bezos, founder of Amazon.com, is gaining some ground, leapfrogging Berkshire Hathaway chief executive Warren Buffet to second place with a net worth of US$67 billion.

According to Forbes, Bezos gained a whopping US$20billion in the course of 2016 – more than anyone else in the list. Buffet (US$65.5billion) hasn't been in third place for 15 years.

After Buffet, it's back to plain technology with Facebook founder Mark Zuckerberg (US$55.5bn) hitting fourth place for the first time at the expense of Oracle's founder Larry Ellison (US$49.3billion) who hit his lowest ranking since 2007.

After a brief break from tech for ranks six through eight (Michael Bloomberg and the Koch brothers), ninth and tenth slots belong to Google co-founders Larry Page ($38.5billion) and Sergey Brin ($37.5billion). Things go a bit quiet for technology after that, but there are still slots in the top 20 for Steve Ballmer ($27.5billion) and Michael Dell ($20billion). Apple co-founder Steve Jobs' widow Laurene Powell Jobs is 23rd, with $17.7billion – though much of that is via Disney riches. Oh, and for reference, Republican presidential candidate Donald Trump is 156th, with $3.7billion.