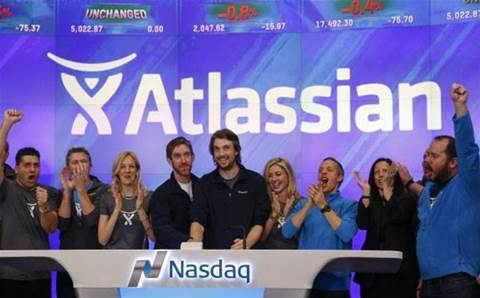 Technology entrepreneurs continued to dominate the Australian Financial Review Young Rich List this year, with Atlassian co-founders Mike Cannon-Brookes and Scott Farquhar once again tied for the top spot for the seventh year in a row.

The list compiles the net worth of the 100 richest Australians under the age of 40 as of 30 September, with entries that include mostly entrepreneurs, with a number of sport stars and celebrities also making the cut.

Out of the 100 listed, 23 are came under technology while eight others were listed under online retail, including Ruslan Kogan and David Shafer of Kogan.com.

The AFR said this year’s list smashed last year's collective wealth record to reach $23.5 billion, up from $13.2 billion, with many benefitting from surging share prices and big capital raises that boosted company valuations.

Cannon-Brookes and Farquhar each have $7.1 billion to their names, more than ten times the wealth of third-placer Tim Gurner of property developer group Gurner, which came in at $631 million.

The Atlassian co-founders more than doubled their wealth from 2017, when they were listed with having $3 billion each. Cannon-Brookes made the headlines last month for paying a record $100 million for Sydney property Fairwater, making it Australia’s highest-priced residence. Farquhar held the previous record of paying $73 million for the neighbouring Elaine in April 2017.

Up next in the technology sector was Ori Allon of real estate software company Compass at No. 4, followed by Kayla Itsines and Tobi Pearce of popular fitness app Sweat at No.5. Collis and Cyan Ta'eed of online marketplace Envato came in at No. 8, and Ruslan Kogan took the 12th spot.

Last year’s runners up to the Atlassian duo Ben Richardson and Dave Grenier of Campaign Monitor have slipped to No.13 and 14, respectively, despite adding just under $50 million each.

Other notable tech entrants include Canva co-founders Melanie Perkins and Cliff Obrecht at No.17, Airtasker co-founder Tim Fung at No. 94 and Fonebox founder Jordan Grives at No.98.

Falling off the top 100 this year are GetSwift’s Joel Macdonald after the company’s share price took a nosedive earlier this year, and Matt Berriman from Unlockd, which went into voluntary administration due to troubles with Google.

Grow your software revenue by selling these 5 affordable, essential tools for the modern workplace
By Nico Arboleda
Oct 26 2018
3:18PM