Telcos have been given six weeks to improve customer service standards on complaints handling, advertising and credit management, as the media watchdog prepares to register a revised code governing the industry.

The long-awaited revision to the Telecommunications Consumer Protection (TCP) code will come into effect on September 1 after more than two years of negotiations between telcos and the Australian Communications and Media Authority (ACMA).

The first revision to the code since 2007 will push telcos to reduce consumer complaints through measures such as notifications over set data usage limits as well as expenditure and credit management tools.

It will also enforce tighter advertising rules on the industry, banning the use of the word "cap" except in legitimate circumstances, while requiring unit pricing for two-minute calls, SMS messages and per-megabyte data charges.

Despite threats of direct regulation on the industry should it fail to revise the code, the ACMA commended lead body the Communications Alliance for meeting "95 percent" of the recommendations included in the media regulator's 18-month inquiry into telco customer service.

A spokeswoman for the ACMA said the watchdog had made concessions on the type and amount of information required to be advertised alongside plans to account for a "diverse industry, from Telstra down to a garage-operated ISP".

Telcos have escaped a requirement to provide notifications to users at 50 percent, 85 percent and 100 percent of reaching their data usage limits in real-time, a measure some in the industry had described as impossible. Instead, users will receive notifications within 48 hours of reaching those tiers. 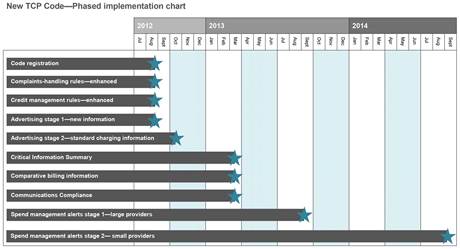 Planned phased implementation for the TCP code (Click to enlarge)

The code will not mandate inclusion of spend management tools for large telcos until September next year, though some have begun deploying such tools.

Some elements of the TCP require immediate implementation from September 1, such as improvement to complaints handling, credit management and some new advertising rules.

"For those areas that are new, we will first implement an educative approach but for anything that's been in place from the old code to the new code, there's certainly no grace period and no allowance of non-compliance," the ACMA's spokeswoman said.

Those elements considered more onerous — such as critical information summary and unit pricing — have been pushed back until March 2013 to provide time for compliance.

Smaller telcos have received greater reprieve on implementing spend management tools, with requirements they notify users at aforementioned data usage limits by September 2014, instead of next year.

It is expected the longer timeframe will enable those smaller providers to catch up on the technology required to implement such tools. But concerns remain as to how many of those companies are aware of their legal requirements, or able to meet them.

John Stanton, head of Communications Alliance, has previously warned the code's conditions could be onerous for small telcos and could see them shift out of the industry.

The ACMA's spokeswoman said such requirements in the code could become a point of competition between telcos tussling to present better customer service than their rivals.

"There are a number of requirements that will be placed on small providers that they hadn't previously contemplated," she said.

"There is a more generous timeframes on those smaller companies to meet those obligations but realistically if they're not able to meet them — this is what consumers expect and require — then perhaps this isn't the industry for them."

ACMA chairman Chris Chapman warned that "compliance with the code is no longer an option" and that the watchdog would use its powers to enforce the code where required.

Despite greater requirements on telcos to improve their ways, the ACMA has not received any additional powers to enforce the code or police breaches.

The watchdog remains able to formally order a telco to comply with the code — as it has done with Telstra and Vodafone in recent months — or take the companies to the Federal Court.

"Enforcement powers are essential in getting industry compliance," she said.

"The Australian Competition and Consumer Commission, for example, has much stronger powers and its issuing of fines has sent a strong message to the telecommunications industry that its advertising cannot be misleading."

Corbin, who had voted against the initial code's submission for consideration by the ACMA in February, said she would lobby communications minister Stephen Conroy to bolster powers to the ACMA.

The code's revision has also seen the ACMA begin to share powers with a new industry-funded body, Communications Compliance.

Borne out of the Communications Alliance, the new body would look to educate telcos on compliance with the code, while working the ACMA to root out potential breaches. But it gained no extra powers to police or enforce requirements on the industry.

The body's inception has attracted questions around its independence from the industry and its potential to 'go soft' on telcos around compliance.

"[Communications Compliance] is a company limited by guarantee and independent of Communications Alliance and the industry, and will benefit from direct consumer input at the Board and management levels," Stanton said.