Telstra has partnered with Microsoft to develop a platform for sharing and analysing data across industries.

The new "Telstra Data Hub" was developed to help the telco’s customers make use of the 99 percent of data it says goes unused, along with solving the hassle of sharing data securely across industries.

Telstra and Microsoft will initially target three industry verticals: supply chains, water management and agri-business. The companies announced “one of Australia’s largest supermarket brands” as one of its first customers, helping it track and monitor its shipping containers.

“The customer and its partners can now look forward in time to proactively respond to operational issues. They are also able to look back in time, to understand systemic chokepoints, improve efficiencies and make better strategic supply chain decisions,” Telstra’s group executive, product and technology Christian von Reventlow said in a blog post. 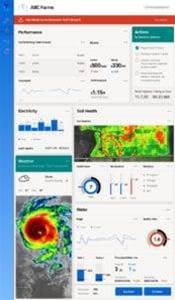 A sample of Telstra's new data dashboards. Click to enlarge

Telstra also announced an unnamed Australian state government has used the service to help improve water quality measurements in the Queensland's Lower Burdekin river. “In a trial, we prototyped new water quality sensors along a major river connected via Telstra’s NB-IoT network, with data visualised, shared and permissioned across multiple government agencies and related entities through the Telstra Data Hub.”

Despite already having a handful of paying customers under its belt, Telstra declined to answer the commercial model for the Azure-hosted service.