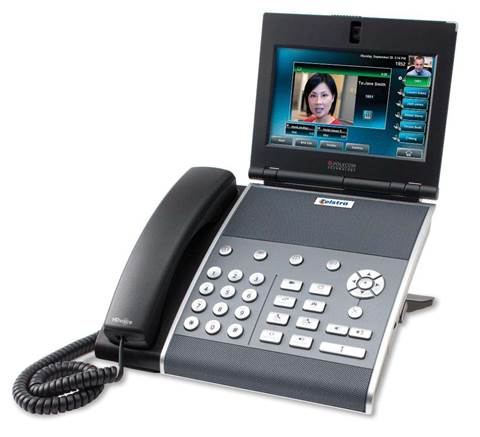 Telstra has launched a managed video phone service for Australian businesses via a partnership with Polycom and Broadsoft.

The service is available on Telstra's hosted IP telephony service (TIPT) hosted on the BroadSoft platform.

Customers can deploy the new VVX 1500 video phone [pictured] by upgrading their hardware..

"We've been working with Telstra in a very close fashion, starting from IP handsets that they run on their managed telephony service (TIPT), all the way now - where we're launching a co-branded video service.

"In between that time VoIP deployments have increased exponentially, so we have got  the scale in business for video," he said.

The Telstra VVX 1500 is available to TIPT customers on a rental arrangement with Telstra for $45 per month over three years and is available from this week.

Adam Britten, Asia Pacific channel director at Tandberg was pleased with the publicity the announcement would bring to the market.

"The more noise in the marketplace, the higher availability of video, helps the entire business," he said.

But he highlighted that there are video telephony options in the market that aren't carrier dependent.

"We've been able to show how organisations can deploy video telephony as a tool without having to tie themselves to a carrier.

"From our perspective being carrier delivered is one option. There are organisations in the marketplace that aren't tying themselves to a carrier.

"But having it delivered as a hosted service is a great option as well," he said.