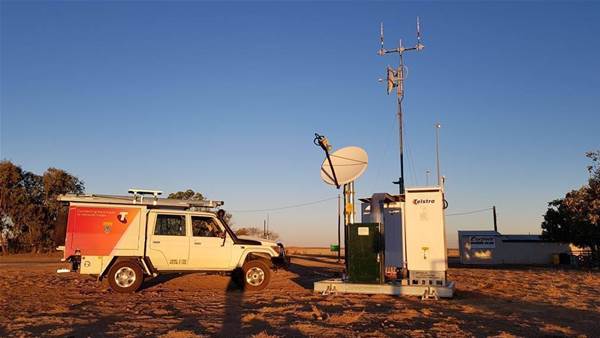 A Queensland town with a population of just ten has mobile coverage for the first time after becoming the first community to install Telstra's 4GX-lite satellite small cells.

The town of Corfield, located 80km north of Winton and 1355km away from Brisbane, has installed two satellite small cells in the remote community, which will give residence access to services on Telstra's 4GX network such as voice calls, text, email, browsing and basic data.

While small cells are not intended to be used to support data heavy applications like video streaming, it is a cheaper alternative than installing a new full-sized base station.

The small cells, which can be fitted to existing buildings or on a standalone platform, are funded by contributions from Telstra and the customer who purchases it, who pay for the initial cost of installation while Telstra builds and maintains the cells.

“For the first time, the Corfield community can now use their mobile devices to call loved ones, suppliers and customers as well as access mobile data, which is becoming increasingly important in a digital and social world no matter where you live,” Telstra regional general manager Rachel Cliffe said.

“By working together, we can deliver innovative solutions to provide mobile coverage in places that simply weren’t feasible in the past.”

Winton Shire Council mayor Gavin Baskett said connectivity has made Corfield safer for the local community and the travelling public.

“Tourism plays a major role in the commercial viability of Winton and the small cell technology makes it financially achievable to deliver digital coverage to really remote parts of our shire.”

Telstra started trialling small cell mobile technology in March this year in Tasmania by deploying them on TasNetworks' infrastructure, the telco that is responsible for the state's electricity and communications.

Grow your software revenue by selling these 5 affordable, essential tools for the modern workplace
By Brendon Foye
Oct 18 2018
10:50AM