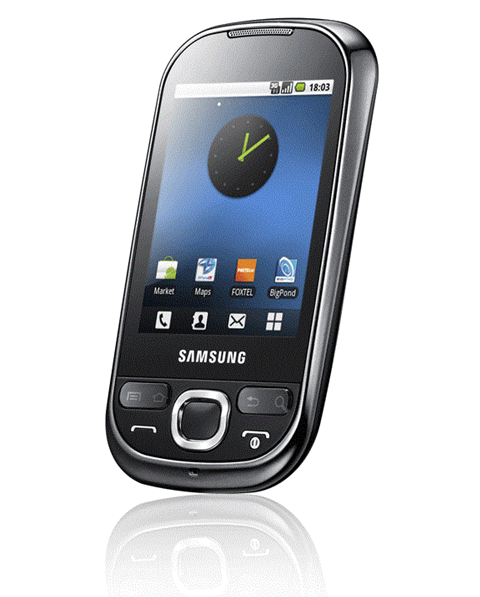 The Samsung Galaxy 5 was an unexpected addition to Telstra's Android stable unveiled today at the Telco's Christmas product preview in Sydney.

The second prepaid Telstra Android after the HTC Wildfire, launched at $199 and was due for release on 19 October. It’s a cheaper and more compact version of the Galaxy S, with a 2.8-inch QVGA LCD, a two-megapixel camera and the Android 2.1 operating system.

For those who’re still fans of the ‘flip phone’ form factor, Samsung has the new S5510T launching on the same date for $129. Its main distinguishing feature is that it’s Blue Tick-approved (so it’ll have good coverage in rural areas), but it’s also available in ‘Sweet Pink’ if you’re not a fan of the basic black.

Over on the Symbian side, Nokia has an impressive new handset in the C6, a smartphone that’s for all intents and purposes a prepaid version of the N97 Mini. The form factor is similar, with a 3.2-inch 640 x 360 touchscreen, slide-out QWERTY keyboard and five-megapixel camera, and the first impression of phone experts at PC Authority was that it felt a lot more solid and well-built than its $299 pricetag would imply. As with the two Samsung phones, it's due to launch on 19 October.

At first glance, the Nokia C5, available now, looks like a typical prepaid phone, making its $199 pricetag seem a bit rich. But there’s more to this handset than meets the eye. As well as being Blue Tick-approved, it’s constructed from stainless steel, and comes with free Ovi Maps GPS navigation, free push email (compatible with Gmail and other webmail services) and compatibility with Microsoft Exchange using Nokia’s Mail For Exchange client.

The LG Craze is an upgrade to the well-received KS360 WebSlider, with a larger four-row QWERTY keyboard, 3G connectivity, and a 3.5mm headphone jack. Like the Nokia C5, it’s available from this week onwards, and is available in blue or red.

Telstra is introducing two new prepaid mobile broadband products on 26 October. The Elite Pre-Paid Mobile Broadband Modem runs at the faster 8Mbps speed, making it the fastest prepaid USB modem in the country. The starter kit is priced at $129, which includes 3GB of data with 30 days expiry.

For an extra $20, there’s also the new Telstra Pre-Paid Mobile Wi-Fi modem, which lets you share a 7.2Mbps Next G network connection with up to five devices simultaneously by creating a Wi-Fi network. The starter kit comes with 5GB of data to use over 90 days, after which the standard recharge amounts for data apply.

Telstra has leaked plans to launch its own Android-branded tablet device in November called the T-Touch Tab, according to an expression-of-interest posted on the carrier's website.

The product was briefly aired at today's Christmas product preview, according to a spokesman for the carrier.

Posts to the broadband forum Whirlpool discussed unconfirmed specifications for the device - with user EdmundBlackadder suggesting the device would have a "7" touchscreen, GPS, WiFi and up to 16Mb via microSD", while other forum posters speculated it would run the Android 2.1 operating system.

It would be priced at $299 on Telstra Pre-Paid, the Whirlpool posting said.

Telstra's spokesman was unable to confirm specifications or price, nor which device manufacturer the telco had engaged to make the hardware.

"We will have more to say in a couple of weeks," the spokesman said.

The carrier said on a web page calling for expressions of interest from consumers that the device would be locked to the Next G network.