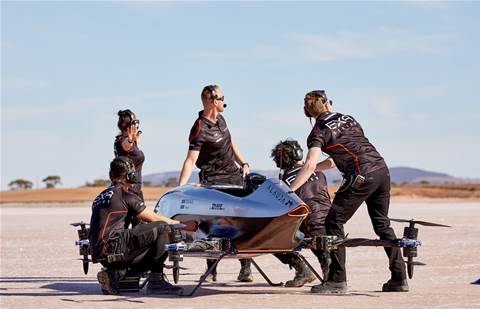 Telstra's services arm will help Alauda develop technologies so that manned flying vehicles can race through closed-circuit courses at high speeds. The companies said in time for the first race in the Airspeeder EXA Series.

The goal is to create a race control system that can transmit data between vehicles, to and from ground support and record telemetry for the drivers and race teams, Telstra Purple' Paul Nicholls said in a media briefing.

The tech will include sensors and edge computing to gather all the necessary data about proximity to objects and other vehicles; artificial intelligence to improve the processing of that data and even act as a co-pilot; and 5G networks to enable the transmitting of data.

The ultimate goal for Airspeeder is to create an environment for innovation that can feed technologies into the commercial development of electric flying vehicles that can be safely used in an urban environment, according to Airspeeder founder Matt Pearson.

“All my life I wanted to build flying cars and so I decided to create a flying car racing series to accelerate the industry,” Pearson said.

“Racing has a foundational place in every vehicle revolution. All the performance and safety innovations that will make flying cars possible will come from racing – it allows us to play with things to make them possible. We want sustainable flying mobility revolution to happen but we need that underlying tech such as connectivity.”

Nicholls said that the project will require “overlayering tradition tech with new tech” to create a “digital forcefield” around the vehicle.

Telstra Purple will also be part of the marketing efforts for the potential race series. This will include tech related to the eventual broadcast of races. The company said it would use data to bring augmented and mixed reality experiences to the audience.

“It’s one thing to get vehicles flying, and multiple vehicles in the air at close proximity – but it means nothing unless we can show the audience what the pilots are facing and the course and Telstra excels at those things,” Pearson said.

The races are to be held in remote locations such as deserts, presenting another challenge to the organisers.

“The race series can occur anywhere across the globe, without infrastructure needs seen in motorsport,” Nicholls said.

“That means we might not have a fixed network … so the control system needs to be transportable, it needs to be able to integrate with the technology available wherever they go, and meet the requirements of the sustainability angle of Airspeeder.”

One solution will be interoperability with other 5G networks across the globe, he said.

“It's a very Australian innovation story - this is one of the only aircraft designed, built, tested and raced in Australia and we’re taking it to the rest of the world. We’re amazingly excited about the potential of this partnership in the future and ... developing technologies that will underpin everything we do run the future.”