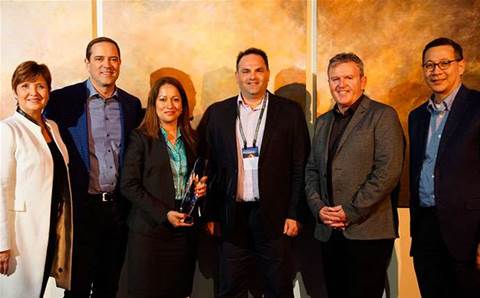 The Telstra team collect their award

Telstra was named Cisco's Asia Pacific and Japan cloud builder partner of the year at the networking giant’s global awards, which took place last week at its partner summit in San Francisco.

Collecting the award for the telecommunications firm were Michelle Bendschneider, Telstra’s executive director in charge of global products, and Chris Losco, general manager of strategic alliances at Telstra.

Telstra was one of the first global partners to launch Cisco’s Intercloud service back in 2014. At the time, the networking company described down under as the "petri dish of the world” for its cloud services.

In 2015, Chuck Robbins, now Cisco’s CEO, described his company’s cloud partnership with Telstra as a “grand slam home run”. Robbins noted that: "Australia probably embraced the transition to cloud faster than any other country did, and Telstra was moving at the front end of that”.

Cisco's cloud strategy, however, has undergone significant change over that time, with the networking vendor backing away from the "Intercloud" moniker.

"While Cisco no longer uses the term Intercloud, the core concept is still very relevant to the industry and our customers," a spokesperson told CRN USA recently.

"At its core, it represents a cloud of clouds and the desire for organisations to move and manage workloads between clouds in a growingly complex world of many clouds. Powerful technologies like Cisco’s CliQr, a hybrid cloud management platform organisations rely on to model, migrate and manage applications across a multitude of clouds is a great example of this."

Telstra was the only Australia-based company to walk away with a global award from the event, however, a number of Aussie companies secured wins in regional categories.

Dicker Data was named distributor of the year for the Asia Pacific & Japan region, while Optus Business scored the APJ award for architectural excellence – enterprise networking partner of the year.

NEC Australia took home the award for solution innovation partner of the year for APJ.

Global awards were won by Japan's Netmagic Solutions that scooped up the cloud and managed services partner of the year gong, while Net One Systems from Japan and India's Wipro won architectural excellence partner of the year awards for data centres and security, respectively.

Japan's Uniadex landed the title of APJ partner of the year.

In handing out the awards, Wendy Bahr, senior vice president of Cisco global partner organisation, commended these partners for their "hard work, commitment and focus” and hoped for "many more years of success together”.

Updated: This story was updated with the Australian companies that won APJ geographic awards.