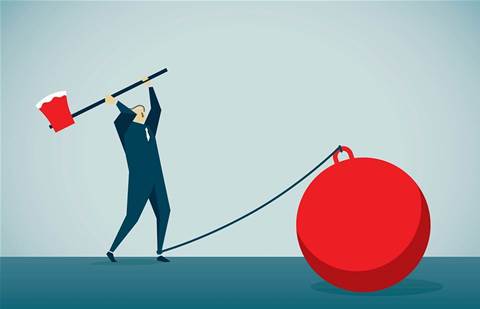 Telstra will cut at least 8000 employees and contractors from its payroll, and slash between two and four layers of management, the telco revealed this morning.

The cuts are part of a three-year strategy called Telstra2022, which seeks to simplify the telco's structure, reduce costs, improve customer experience and turn the carrier around following its continued disappointing financial performance.

Through the cuts, Telstra expects to add an extra $1 billion into its previously announced target of $1.5 billion to see its “productivity program” hit $2.5 billion by financial year 2022.

The company will also break out most of its infrastructure-related business to a new wholly owned entity called InfraCo, to provide “optionality” for a potential demerger in light of the NBN rollout.

Up to $2 billion from monetised assets over the next two years is expected to strengthen Telstra’s balance sheet, which has been under close scrutiny over the past year as its share price has steadily slipped from $4.38 this time last year to a low of $2.74 in May.

“We are creating a new Telstra that is able to continue to lead the market. In the future our workforce will be a smaller, knowledge-based one with a structure and way of working that is agile enough to deal with rapid change,” Telstra chief executive Andrew Penn said.

“This means that some roles will no longer be required, some will change and there will also be new ones created.”

Penn added that Telstra understood the impact the decision would have on its employees, and once the decisions had been made, the company was committed to ensuring impacted staff had adequate support.

Telstra said it would make $50 million available to support programs for impacted staff.

The restructure will also see the creation of Telstra Global Business Services, combined with more simplified processes by moving to “more agile” ways of working and product simplification and the reduction of labour costs.

“The initial focus will be on the reduction of executive and management roles and minimising any impact on customer-facing teams,” Penn added.

“Telstra will also invest in approximately 1500 new roles to build new capabilities required for the future, in particular, the shift to new engineering capabilities including software engineering and information and cyber-security.

Another core component of Telstra's organisational restructure includes the introduction of a new, wholly owned infrastructure unit called InfraCo, which the telco said would “drive performance and provide future optionality for a demerger or the entry of a strategic investor in a post-NBN rollout world”.

With an expected total workforce of 3000, Telstra InfraCo will have its own chief executive appointed to it, who will report to Penn.

The business unit will also look after NBN Co commercial works activities and Telstra Wholesale. It is expected the unit will carry a book value of $11 billion and generated annual revenues of $5.5 billion.

InfraCo will not manage mobile network assets such as spectrum, radio access equipment, towers and some backhaul fibre.

Further simplification measures will have Telstra dramatically change up its product portfolio, with plans to drop all 1800 current consumer and small business plans and introduce 20 core plans supported by a digital service.

These changes will start rolling out in July.

Telstra said its transition would likely eliminate up to $500 million in revenue from its services over the next three years, excess data charges being one key example.

The company provided its 2019 financial year guidance, stating an expected income of between $26.6 billion and $28.5 billion, EBITDA to be in the range of $8.7 billion and $9.4 billion prior to about $600 million in restructuring costs.

Grow your software revenue by selling these 5 affordable, essential tools for the modern workplace
By Nico Arboleda
Jun 20 2018
8:50AM