Telstra's new payphones come under fire - but why? 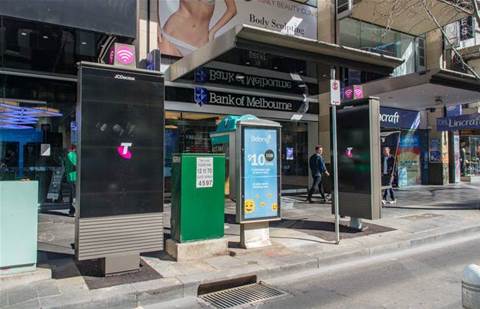 Telstra’s new digital advertising payphones can be found at Melbourne’s Bourke Street Mall. In this photo, the older centre booth sits between two of Telstra’s larger high-tech booths. (From City of Melbourne)

Australia is witnessing the first major redesign of the payphone booth since 1983. But Telstra’s new vision is meeting resistance from some councils, and the matter is in the courts.

In an effort to make payphones relevant to the needs of modern Australians, Telstra’s revamped payphones feature mobile charging, Wi-Fi access through Telstra Air (free or via a Telstra broadband plan, depending on the area), and large digital advertising displays.

Sydney’s Lord Mayor Clover Moore described the new booths as “a craven attempt” to profit from “already crowded CBD footpaths”, and a “Trojan horse for advertising”.

Under existing Universal Service Obligation (USO) agreements, Telstra has to provide payphones as part of its standard telephone service. The USO is a consumer protection measure that ensures everyone has access to landline telephones and payphones, regardless of where they live or work. Telstra is the sole provider of USO services in Australia.

The USO is funded through an industry levy administered by the Australian Communications and Media Authority. This means registered carriers with revenues over A$25 million per year contribute to the levy, including Telstra.

The face of the new Aussie payphone

The booths are 2.64m tall, 1.09m wide, and are fitted with 75-inch LCD screens on one side. In 2016, 40 payphones were approved by City of Melbourne planners and installed over the following year, marking the start of Telstra’s plans for a nationwide rollout.

Telstra’s submission to the city claimed the booths were “low-impact” infrastructure and therefore planning approval was not required, in accordance with the Telecommunications Act 1997 (Cth).

In 2017, Telstra and outdoor advertising company JC Decaux announced a partnership to “bring the phone box into the 21st century”.

It would initially have 1,860 payphones upgraded in Sydney, Melbourne, Brisbane, Adelaide and Perth. These five cities represent 64% of the country’s population and 77% of advertising spend.

Earlier this year, Telstra’s application for 81 new booths was blocked by the City of Melbourne, and the city commenced proceedings in the Victorian Civil and Administrative Tribunal to have the booths redefined as not being low-impact.

Given the council allowed 40 booths to be installed in 2017, it’s unclear why its position has since changed.

In May, Telstra hit back by starting federal court proceedings against the council in an effort to overturn prior proceedings. In June, the Brisbane and Sydney city councils joined the City of Melbourne as co-respondents.

He said the booths were “part of a revenue strategy for Telstra”.

But Telstra claims the new payphones are only 15cm wider than previous ones. A company spokesperson said the extra size was necessary to accommodate fibre connections and other equipment needed to operate the booth’s services.

Who pays for, and profits from, payphones?

In 2017, a Productivity Commission inquiry into the USO reported an average annual subsidy of A$2,600-50,000 per payphone, funded through the industry levy.

Telstra has advertised on its payphones for the past 30 years. But display screens for advertising on new booths are 60% larger than previous ones.

The City of Melbourne is concerned because commissioned research by SGS Economics and Planning estimates a 10% reduction in pedestrian flow because of the new booths. This would happen as a result of people getting distracted by the payphone advertising, and would cost the city A$2.1 billion in lost productivity.

That said, federal legislation doesn’t prevent Telstra from placing advertising on payphones. So the existing court case could hinge on Melbourne city council’s argument that by increasing the size of digital displays, Telstra’s new payphones are no longer low-impact.

The outcome should be known early next year.

Do we still need payphones?

At a time when consumers and businesses use about 24.3 million mobile handsets, it’s reasonable to question whether payphones are still required.

The number of payphones in operation today is sharply down compared with the payphone’s heyday in the early 1990s, when more than 80,000 could be found across Australia.

But there’s strong evidence they continue to supply a vital public service.

Telstra’s payphones operate in many small regional communities such as Woomera, South Australia. It has a population of less than 200 people. (georgiesharp/flickr)

Currently, Telstra provides more than 16,000 public payphones. Last year, these were used to make about 13 million phone calls, of which about 200,000 were emergency calls to 000.

So regardless of the verdict on the Telstra case, the public payphone is and will continue to be an iconic and integral part of our telecommunications landscape.