The channel is on fire (in a good way) says Canalys 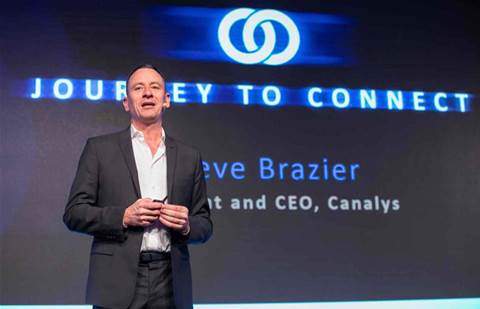 “The channel is on fire.”

And he meant on fire in a good way!

The chief executive’s words sought to bolster the confidence of channel partners who might be feeling dwarfed by large global system integrators, which continually eat away at the market and expand aggressively through acquisition.

“I bet there is a group of companies that you guys are jealous of: the global system integrators,” Brazier told the audience of partners in Taipei. “You go through every airport and they seem to be the ones that are advertising the most.

"Accenture, through many acquisitions of small, specialist born-in-the-cloud companies, has become the largest provider of public cloud services in the world.”

In Australia alone, Accenture has snapped up four channel partners in the past year. It bought Canberra’s Apis in December, BCT Solutions in June, Analytics8 in August and PrimeQ in December 2018. Local acquisitions by other major consultancies are also common.

While Canalys notes that those acquisitions and an increasing cloud services focus is driving growth for big SI’s, the analyst’s numbers suggest the IT channel shouldn’t doubt their worth for a second.

“We’ve done a little bit of an analysis about how well these companies are doing, and I wanted to share something with you,” Brazier said.

“Had you invested in the [major global system integrators] five years ago, you would have doubled your money. It’s been a very strong performance.

“But if there’s one slide I want you to take away from this presentation and reuse, and think about, it's that the IT channel has comfortably outperformed the global system integrators - but nobody knows it! Nobody talks about it.

“Had you invested in the leading channel partners over the last five years, you would have tripled your money. The channel is on fire, and investors are recognising it.”

Brazier then took aim at other analyst firms who have downplayed the importance of channel businesses.

“There are some American competitors of ours, who tell you, ‘the channel doesn’t have a future, it’s run by ageing people, they haven’t transformed’. They are completely wrong. It’s nonsense,” he said.

“The channel around the world is doing extremely well. The big partners and the smaller partners from every survey we do in every country is comfortably outperforming the performance of technology vendors and the economies they work in. We are a sector on fire. The only thing holding you back is your confidence to believe in yourself.”

The top ten global channel partners in the world include the likes of CDW, World Wide Technology (WWT), SoftwareOne, SHI, Insight, Computacenter, Bechtle, Atea, Econocom and Sirius. As a group, those companies grew 11 percent in terms of revenues over the past 12 months.

“If you’re not growing at 11 percent, you’re losing market share,” Brazier said. “But we’ve spoken to many of you over the last three weeks and most of you are growing over 11 percent and you should be very proud.”

The channel opportunity is rich

Brazier earlier in the keynote had highlighted IoT as one of the biggest opportunities for the channel moving forward.

According to Canalys data, there were 16.7 billion connected devices. By 2023 it expects that number to hit about 32 billion, aided by the rise of 5G and Wifi 6.

“They might be cars, devices, smartphones, cameras, robots, vaccum cleaners, lawnmowers, obviously PCs and other technology products,” he said.

“Each of those products needs to be sold, maintained and needs to be delivered - perhaps as a service. That’s your job!

“It’s a very simple core mission: deliver these devices that connect to the internet and maintain them. As that market doubles, if you go down that journey with the industry, you’re going to do very well I promise you.

“Equally, as we see a doubling of devices, just think about the amount of data and how that data needs to be managed, stored, backed up, have disaster recovery procedures in place and security in place.”

Another opportunity Canalys continues to encourage partners to think seriously about is security, with Brazier referring to the segment as “the gift that keeps on giving” from an opportunity and growth perspective.

“Any of you focused on security will do very well,” Brazier said. “Most of you are old enough to remember when security first started. In 1996 Microsoft put a password on Windows 95, and you probably all remember it was quite annoying.

“Since then there has been an arms race of innovation, way too much for me to cover since then: VPNs, firewalls, building redundancy into systems, but I wanted to highlight a few of them that perhaps you haven’t thought of.”

Brazier spoke to the social engineering threat of security, noting that individuals who spend enough time eavesdropping on or building face-to-face trust with target company employees will eventually gain the information they need to access both physical properties and internal systems.

“So one of the trends we see - an easy business for you to get into - is to get into physical surveillance; building surveillance. This is an area where China now leads the world,” he said.

Because physical security systems are shifting toward implementing technologies such as biometrics which can also make accurate assumptions about where individuals are on a premises, Canalys expects the convergence between cybersecurity and physical security to grow very soon and very quickly.

The chief executive then rounded out his presentation with some predictions for the future in the channel and technology.

These included speculation that Google would have to make a considerable hardware or software acquisition in the next 12 months if it intends to gain a greater share of public cloud competitiveness; a new taxation on deliveries of online-bought consumer hardware; and that within three years Chinese companies will become the leaders in AI, smart cities, 5G, exascale computing and microfinance.

The journalist travelled to Taipei as a guest of Canalys

Cloud application revenue made easy
By Michael Jenkin
Dec 5 2019
8:40AM