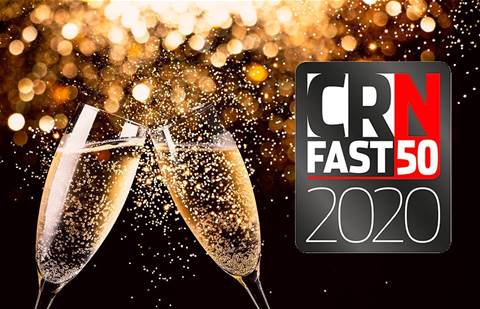 Australia’s biggest celebration of channel success begins today. The fastest growing IT providers in Australia in 2020 will be revealed beginning at 12pm (ADST).

This year has been a tumultuous year for Australian IT providers but we have seen their resilience and ingenuity bring them through a tough economic period.

Now in its 12th year, the CRN Fast50 recognises the fastest-growing companies in the Australian IT channel, based on year-on-year revenue growth.

The 2020 CRN Fast50 companies have proven that hard work and customer obsession will yield great results no matter the circumstances. This year we have seen total growth percentages in excess of last year and a swathe of first-time entrants. From traditional resellers to specialists and boutique consultancies, the CRN Fast50 for 2020 demonstrates the diversity in the Australian IT industry.

These companies come from all across the country and have worked with customers from almost every industry driving Australia’s economic recovery by bringing solutions which drive down cost and complexity.

Tune in each day at 12 pm this week as we count down the 50 fastest growing IT providers in the country. Each day we'll reveal ten companies beginning with 50-41 and culminating on Friday with the top ten in a special presentation.

Throughout the week we will also be presenting our Fast50 2020 special awards which champion outstanding efforts in a given year or over multiple years.

The special awards for this year include:

The Leader Award which celebrates both fast growth and scale, recognising the Fast50 company with the largest overall revenue.

The Editor's Award which goes to the company that stands out for excellence. Judged by the CRN editorial team, we are particularly impressed by companies that stand out in driving customer outcomes, technological innovation, growth strategy and giving back to their community.

The Icon Award is presented to the company that other Fast50 companies vote as having made the most significant contribution to the Australian channel, based on a list of nominees provided by the CRN news team.

The Young Leader Award is given to the youngest CEO whose company made the Fast50.

Lastly, as we do each year, CRN celebrates its Fast50 All-Stars. These are the companies making at least a fifth appearance in the Fast50 a task which was particularly difficult in 2020.

So join us each day this week as we celebrate the very best of the Australian IT channel in 2020. The countdown begins today so strap in and don’t forget to follow along on social media with the hashtag #Fast50.