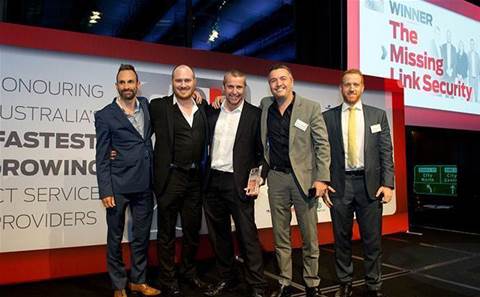 CRN is pleased to announce its eighth CRN Fast50, an annual list of the fastest-growing IT service providers in the Australian technology industry.

At a glittering awards ceremony at the Hyatt Regency in Sydney on 1 December, CRN named The Missing Link Security as No.1 on the list.

The Sydney security specialist was founded by two former Dimension Data security experts, in partnership with directors from one of Sydney's most successful midmarket IT service providers. The new company rapidly expanded between the 2015 and 2016 financial years, with 333.26 percent growth.

Second place went to EFEX Group, a Sydney-headquartered print service provider that also came second in 2015. Third place was clinched by Araza, a Melbourne company that achieved huge growth based on service alone.

Details on the other 47 winners, including the entire list, a full breakdown of their stats and analysis of the numbers have been published in the December issue of CRN magazine.

For a slideshow of the full list of winners, check out our 2016 CRN Fast50 gallery, or please register for our CRN Channelwire email newsletter and you will gain access to a summarised 2016 CRN Fast50 ladder.

This year, the largest contingent of CRN Fast50 companies hailed from New South Wales, with 22 entrants, with the rest from Victoria (12), Queensland (8), South Australia (4), the ACT (2) and Western Australia (2).

Overall, the CRN Fast50 generated $863.6 million of revenue. They grew by more than $300 million year-on-year. The average growth rate was a staggering 75.87 percent, the fastest since the awards program began in 2009.

CRN editor Steven Kiernan said it was fantastic to recognise a phenomenal array of high-performing IT companies.
"It was one of the most competitive years we have ever seen in the eight-year history of the CRN Fast50. I take my hat off to the fifty incredible companies in this year's list. To achieve a place in the CRN Fast50, technology providers had to outpace the non-stop IT industry," he said.
"This year's CRN Fast50 group turned over more than $850 million in 2016. They employed well in excess of 4000 people. CRN Fast50 companies drove the Australian innovation agenda and supported the digital transformation of hundreds, if not thousands, of customers.
"I am delighted to acknowledge the contribution they made to Australia's economy and our vibrant IT industry. It takes an exceptional IT provider to achieve such fast growth in such a highly competitive industry. Appearing in the CRN Fast50 is a sure sign of innovation and differentiation."

CRN also recognised a number of companies with special awards.

The 2016 CRN Fast50 Icon Award – as voted by the CRN Fast50 companies themselves – went to trans-Tasman IT services firm Datacom.

Judging the CRN Fast50 Editor's Award, the CRN team were split between two standout Sydney IT providers, so this year there were two Editor’s Awards. Insentra shone thanks to mammoth Microsoft deals and global expansion, while BEarena led a series of transformative projects for major customers utilising hyperconverged infrastructure and flash storage.

The CRN Fast50 Leader award goes to the largest company on the list. This year the winner, making its CRN Fast50 debut, was Kinetic IT with a staggering revenue of $179.8 million, making the Perth-based company one of the largest to have ever graced the list.

CRN also welcomed Red 29 as an entrant into the CRN Fast50 All Stars club, an exclusive group of IT providers to have appeared in the awards at least five times. Red 29 first appeared in the Fast50 in 2011, and joins existing All Stars Commulynx, which achieved All Star status in 2014, and Blue Apache, which has made the list for all eight years.