This is how VMware plans to remain relevant in the cloud 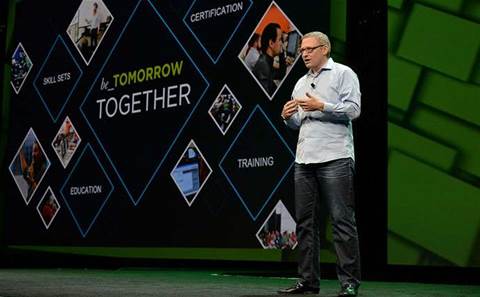 VMware wants to make the cloud a core part of its future, but it will do so primarily by providing tools to manage services across other companies' public clouds, as well as providing the underlying architecture for businesses to host their own private clouds.

So far, VMware's vCloud Air offering has failed to make a significant dent in the market, with Amazon's AWS well ahead of the pack, and Microsoft's Azure a distant but clear second. Given VMware's lag in the public cloud space, it's unlikely the virtualisation specialist will catch up.

On the first day of VMworld 2016, the company announced its new Cross-Cloud Services offering, which will allow clients to manage, move, duplicate, secure and govern applications running across multiple private and public cloud services.

In an interview with Asia-Pac media, Gelsinger said that the Cross-Cloud offering would be a "substantial" and self-sustaining part of the company's business in three or four years time. Gelsinger defined the terms significant and substantial as shorthand for US$1 billion.

The company clearly sees a huge potential in cloud computing, with its own research showing that the current global IT workload is split 16 percent in the public cloud, 12 percent in private clouds, and 72 percent still running on traditional IT infrastructure.

If the company's modelling is correct, by 2021 traditional IT's share of the workload will fall to 50 percent, with public clouds accounting for 30 percent, and private clouds the remainder.

VMware believes that it can succeed with hybrid cloud management where several startups have failed to flourish.

At a Q&A session this week, Guido Appenzeller, chief technology strategy officer at VMware, outlined his thoughts as to why these hybrid cloud management startups floundered.

With it being "still the early stage of adopting the public cloud", these services were too tough for these smaller firms to sell. Additionally, it's difficult for a startup to get a large enough sales force to help monetise all the opportunities that do exist.

Thanks to the virtualisation firm's much larger size, Appenzeller said that it has the resources and assets to not only build up a comprehensive management offering, but can also, presumably, ride out the ramp-up phase.

On top of this, VMware has a large base of customers and channel partners to drive sales of upcoming Cross-Cloud Services suite.

According to Appenzeller, VMware not only has a "history of working with different vendors", it is also able to portray itself as a neutral party, a position unavailable to the large cloud players, such as Amazon with AWS and Microsoft with Azure.

Just as importantly, the company's new Cross-Cloud Services suite is able to work with private clouds too. Although demonstrations are taking place right now as part of VMworld, the company has refused to say when it will hit the market.

Like the public clouds that it is designed to manage, Cross-Cloud Services will be available as a part of subscription model. Gelsinger said that subscription model is "clearly where the industry is going", but for VMware to succeed in this new age it will need to "learn new some new muscles", as it requires new selling techniques, and engenders different client and channel relationships.

This author is attending VMworld 2016 as a guest of VMware.