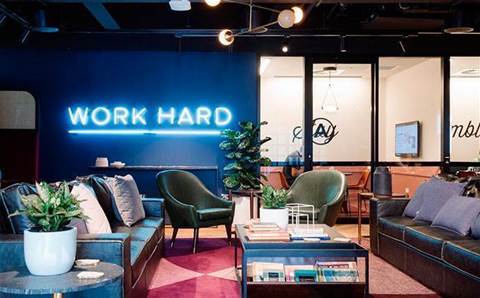 Thomas Duryea Logicalis is the latest Australian technology firm to set up shop in WeWork offices, joining tech businesses such as Microsoft, Zoom and Go Daddy that have stationed their staff at the company's furnished offices and co-working facilities.

TDL is moving all its Sydney staff and operations out of their office in Millers Point and relocating to WeWork in Martin Place in the next week to allow the company to "scout for a new office location to support business growth".

The $120 million IT solution provider, which was born from the 2015 merger of Melbourne-headquartered Thomas Duryea and Sydney-based Logicalis, has 300 staff across the country, with some 60 people in Sydney and the majority of staff in Melbourne.

TDL chief executive Michael Chanter is based in Sydney, while most of the management team are in Melbourne.

The Sydney team has grown significantly since Chanter joined in late 2013. "When I joined four years ago we had 12 or 14 people [in Sydney]," he told CRN.

Chanter was promoted to chief operating officer in 2016 then chief executive in 2017.

The company recently hired a top salesperson with the appointment of Sandra Tuohy as national sales boss out of Optus.

Chanter pointed to the obstacles for companies hunting quality commercial offices in Sydney.

"At the moment there is only 3 percent vacancy in commercial property so it is quite a challenge to get out there and find a good space, and it is important to have a good space," he said.

Forecasts from BIS Oxford Economics, reported in the Australian Financial Review, found that an inadequate supply of new office space was expected to drive the office vacancy rate in the Sydney CBD to just 3 percent by the end of 2019.

Vacancies for office space in Sydney CBD fell to a near 10-year low in the final quarter of 2017.

Chanter said: "We decided to jump into WeWork. It has fantastic facilities, and a lot of colleagues from different businesses we work with [work there].

"It is important to have the right environment for your team. I am taking my time to find the right place. I could move into a boring corporate environment tomorrow, but that is not what we are looking for.

"We want to provide the best environment so we will take some time and spend a bit of money and in the interim WeWork is a fantastic option. A lot of the bigger organisations are using it [WeWork] as overflow and to have a bit of flexibility," Chanter said.

While co-working spaces tend to conjure up images of software startups, major businesses are also taking space in WeWork.

Microsoft is a major tenant, with its own section of a floor at 333 George St that allows frontline staff the ability to work from the city.

The software company has a partnership with WeWork around the world, including giving 300 of its New York sales staff access to WeWork offices in 2017.

Fast-growing WeWork now has more than 14 million square feet of office space, reported Business Insider, which has led to massive lease obligations. The company reportedly owes $US18 billion in rent.

Eliminating departmental friction within MSPs
By Steven Kiernan
Jul 2 2018
7:15AM