Toshiba chip unit reportedly worth as much as $40 billion 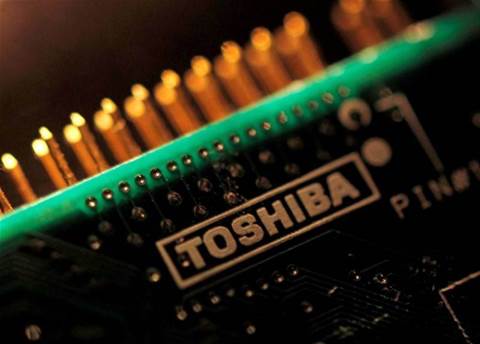 A Hong Kong-based activist investment fund said Toshiba's chip unit was worth as much as US$40 billion, double the sale price agreed with a Bain-led consortium, as it escalated its opposition to the deal.

Argyle Street Management is seeking to persuade Toshiba to either negotiate a higher price or list the unit, highlighting concerns that the Japanese conglomerate agreed to sell it too cheaply while in the throes of a financial crisis last year.

The fund, which has US$1.3 billion under management, says other activist investors are on its side, but it is not clear how much support it has garnered. Argyle has also not disclosed the size of its stake in Toshiba.

Toshiba Memory, the world's no. 2 producer of NAND chips, is due to be sold for 2 trillion yen (US$18.6 billion) but Argyle argues the unit is worth 3.3 trillion yen to 4.4 trillion yen, citing an valuation analysis by a third-party Japanese firm.

"The suggested range is in line with views of most analysts," said Hideki Yasuda at Ace Research Institute, who values the unit at nearly 4 trillion yen and believes Toshiba should not sell.

The sale failed to close by an agreed 31 March deadline as the two sides are still waiting on regulatory approval from China. That gives Toshiba the option of cancelling the sale without penalty, and the industry and bankers are waiting to see how much momentum Argyle will gain in its campaign.

A Toshiba spokesperson declined comment on the Argyle statement. Chief executive Nobuaki Kurumatani told reporters this week that the company had no plans to cancel the sale unless there were "major material changes" in circumstances.

The Japanese conglomerate believes a majority of shareholders still support the sale, one source directly involved in the matter has said, declining to be identified as discussions on the issue were private.

The Bain consortium last year won a long and highly contentious battle for the unit, which Toshiba put up for sale after billions of dollars in cost overruns at its Westinghouse nuclear unit plunged it into crisis.

Under the deal with Bain, Toshiba would not be giving up the chip unit entirely as it plans to repurchase a 40 percent stake in the business.

While the sale of the chip unit was once thought necessary to rescue Toshiba from insolvency and a delisting, the conglomerate no longer needs the funds as much, having raised US$5.4 billion from a share issue to foreign investors late last year.

A boom in demand for semiconductors has also doubled annual chip-related earnings for Toshiba compared with its previous peak, said Ace Research's Yasuda.

While there are concerns that the current chip boom is tapering off, the long-term outlook for so-called 3D NAND chips which have a stacked cell structure giving them far more storage capacity, is still rosy, he said.

"Demand for three-dimensional NAND chips is likely to stay strong in years to come as these chips will be increasingly used in data servers, cars and game consoles."

Telecommunications Services
By Makiko Yamazaki and Taro Fuse
Apr 9 2018
6:16AM