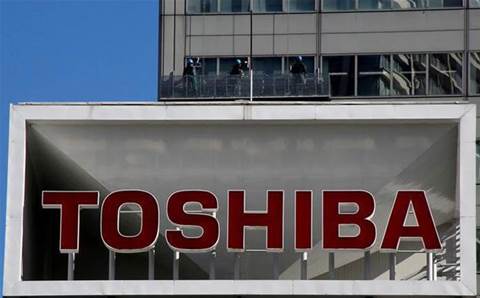 Japan's Toshiba reported a 76 percent jump in second-quarter operating profit on Thursday, driven almost entirely by a strong performance from its memory chip unit which it recently agreed to sell for US$18 billion.

The robust results on the back of soaring demand for chips used in smartphones and data centre servers underscore the difficulty Toshiba will face in generating substantial earnings once the unit, the world's second biggest producer of NAND flash memory semiconductors, is sold.

Toshiba, desperate for funds to cover liabilities arising from it US nuclear unit Westinghouse, agreed in late September to sell Toshiba Memory to a group led by Bain Capital, although under the deal it plans to repurchase 40 percent of the business.

Operating profit for July-September jumped to 135 billion yen (US$1.2 billion), its best-ever result for a second quarter and beating a consensus estimate of 125 billion yen (US$1.1 billion). Its chips and devices division accounted for 97 percent of that profit.

"We are aware that the proportion of the memory chip business in our overall profit is extremely high," chief finiancial officer Masayoshi Hirata said in an earnings briefing.

But he added that earnings from the conglomerate's energy and social infrastructure businesses were expected to improve as the company had "tightened risk control over the past year to focus on profits instead of scale".

Hirata also said Toshiba may look at completely withdrawing from loss-making operations that have already been scaled back such as its TV and personal computer businesses.

The struggling conglomerate, which has spent most of the past year in financial crisis, still faces a slew of risks including the likelihood that the sale of the chip unit may not close before the end of the financial year in March as regulatory reviews usually take at least six months.

If it doesn't get the deal done in time, it could end the year in negative net worth for a second year in a row, putting pressure on the Tokyo Stock Exchange to delist it.

Hirata stressed, however, that Toshiba was making preparations in case the deal did not close by end-March, saying it had "launched a working group to consider various measures" to raise capital.

The deal also faces legal challenges from estranged business partner Western Digital, which argues no deal can proceed without its consent.

As flagged last month, the company said it expected an annual net loss of 110 billion yen (US$971 million) due to taxes related to the sale of the memory chip unit.

That does not reflect expected gains from the US$18 billion sale as the deal has yet to receive regulatory approval.

The global chip market boom has boosted demand for chip-producing equipment to the extent that equipment manufacturers are telling Toshiba to book orders early or will not be able to get the equipment in time, Hirata said.

Cloud application revenue made easy
By Makiko Yamazaki
Nov 10 2017
6:35AM