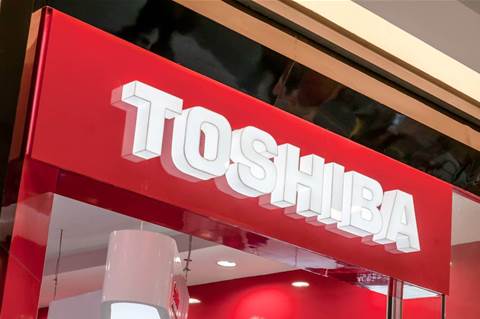 Toshiba is considering a US$20 billion offer from private equity firm CVC Capital Partners to take it private, a person familiar with the matter said, as the Japanese industrial conglomerate faces pressure from activist shareholders to improve governance.

The proposed deal, which comes three weeks after shareholders approved an independent probe into the scandal-hit company, could shield management, particularly chief executive Nobuaki Kurumatani, from that scrutiny. It would, however, invite regulatory review given its government work.

“Toshiba received an initial proposal yesterday, and will ask for further clarification and give it careful consideration,” Toshiba said in a statement, without providing further details.

Toshiba’s board, which includes Kurumatani who joined Toshiba from CVC, and Yoshiaki Fujimori, a senior adviser at the private equity firm, discussed the proposal on Wednesday, the source with knowledge of the proposal said.

Shares in Toshiba soared 18 percent to their daily-limit on Wednesday.

CVC is considering a 30 percent premium over Toshiba’s current share price in a tender offer, putting the value of the deal at nearly 2.3 trillion yen ($27.6 billion) based on Tuesday’s closing share price of 3,830 yen, said the source, who declined to be identified as the matter is private.

“We believe that current shareholders, especially activists, will want a rather steep price,” he said in research note.

If they accepted the current offer it would still be the biggest private equity-led deal in Asia Pacific this year, surpassing Blackstone’s US$6 billion offer for Crown Resorts Ltd in Australia, according to Refinitiv data. It would also be CVC’s biggest foray into the region so far.

For CVC, which declined to comment, the proposal represents another chance to expand in Japan where large companies are under pressure to sell non-core assets and improve returns to shareholders. Other deals by the private equity firm include the US$1.5 billion purchase of Shiseido’s lower-priced skincare and shampoo brands.

Any approval by Toshiba’s board will face regulatory review, because Toshiba, which makes products ranging from escalators to sewerage plants, is one of only a handful of companies able to build nuclear reactors and manufactures other sensitive equipment, including lithium-ion batteries for Japan’s military submarines.

Japan’s government would want to ensure that Toshiba’s work on infrastructure was not disrupted, Chief Cabinet Secretary Katsunobu Kato said in a press briefing.

“Even though it faced bankruptcy Toshiba is still one of Japan’s leading companies. It also has many businesses linked to government policies, so it seems a little unrealistic for it to become a foreign-owned private company,” said Takuro Hayashi, an analyst at Iwai Cosmo Securities.

Toshiba’s management has been under pressure from activist funds since it sold 600 billion yen of stock to dozens of foreign hedge funds during a crisis stemming from the bankruptcy of its US nuclear power unit in 2017.

That battle is seen as a test case for whether Japan’s established corporate giants will respond to calls for better governance.

On March 18, Toshiba’s shareholders, led by Singapore-based Effissimo Capital Management, voted in favour of an independent probe, opposed by management, into allegations that investors were pressured to agree with management proposals.

“The incentives for management would be to have a friendly shareholder who would keep them in place. There is the government to consider as well for Toshiba as they seem to have been heavily involved behind the scenes,” said LightStream Research’s Kato.