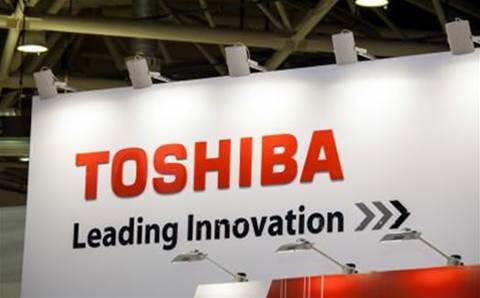 Toshiba has appointed a former banker from a key creditor bank as chief executive and forecast its first annual profit in four years, making progress in its efforts to recover from billions of dollars in losses at its US nuclear unit Westinghouse.

Nobuaki Kurumatani, a former executive of Sumitomo Mitsui Financial Group, will become chief executive and chairman from 1 April and be responsible for longer-term strategic decisions as well as dealing with outside parties.

Current boss Satoshi Tsunakawa, who has overseen Toshiba's attempts to dig itself out of its financial crisis, will become chief operating officer and be responsible for day-to-day operations.

Bolstered by its chip business, the struggling industrial conglomerate predicted net profit of 520 billion yen (A$6.35 billion) for the year ending March, up from a prior forecast of a US$1.02 billion loss and much higher than a consensus estimate of a US$1.75 billion profit.

The revised estimate comes on the back of a sale of Toshiba's claims against now-bankrupt Westinghouse Electric to a group of hedge funds, a deal that also affords the Japanese firm tax benefits.

The return to net profit, combined with an additional US$5.9 billion gained from the issue of new shares to overseas funds, will help Toshiba avoid falling into negative net worth for a second consecutive year, allowing it to remain a listed company.

That, in turn, means less urgency for Toshiba to sell its prized chip business - the world's second-biggest producer of NAND memory chips - to a consortium led by US private equity firm Bain Capital.

The revised estimates also showed, however, that without the memory chip division, its annual operating profit is set to be zero.

Toshiba says it aims to complete the sale of the chip unit by an agreed deadline of the end of March but it is widely viewed as unlikely to gain the necessary regulatory clearance in time. If it doesn't complete the deal by then, it has the option of walking away, sources have said.

Kurumatani is currently the president of the Japanese arm of European private equity firm CVC Capital Partners and is a former deputy president of Sumitomo Mitsui Banking Corp, one of Toshiba's main lenders.