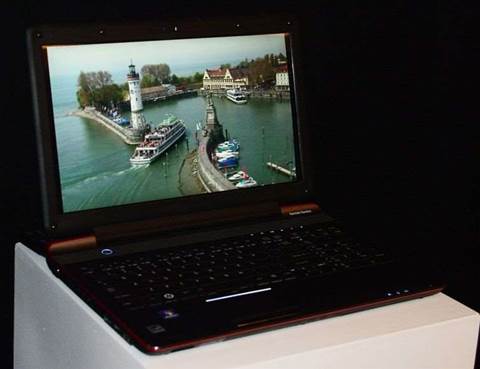 Toshiba has unveiled a 3D laptop that doesn't require the user to wear special glasses.

The 'World's First Glasses-Free 3D Laptop' was unveiled at a showcase of the company's upcoming releases, although it's not ready for inclusion in Toshiba's 2011 line-up and may be up to a year away from appearing on the market.

The laptop uses a webcam to track the user's face and eyes, with the 3D effect created by liquid crystal lenticulars on the 15in screen. It provided a surprisingly pleasing viewing experience in our brief tests.

The effect works at an approximate maximum distance of 140cm, and is limited to a 20-degree cone of vision, within which you can shift without losing 3D vision. Slip outside the sweet spot, however, and you'll be returned to a regular 2D experience.

Also somewhat impressive, but slightly disorientating and headache-inducing, is the ability to run 3D content on a regular 2D desktop.

Toshiba claims the technology will find a variety of home entertainment and business uses, including virtual 3D tours of houses in estate agents' windows.

The full implementation won't arrive in Toshiba products until the beginning of next year. But when it does arrive in a saleable form, and perhaps with infrared sensors included, it could deal a deft blow to devices such as the Sony VAIO VPCF21Z1E, which remain dependent on the awkward specs.