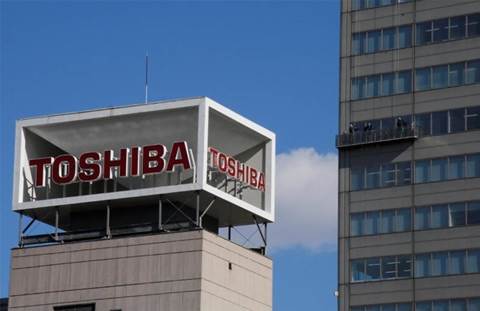 Toshiba is looking to raise at least 1 trillion yen (US$8.8 billion) from the sale of a majority stake in its flash memory chip business as a buffer against any fresh financial problems, a source with direct knowledge of the matter said.

After flagging a US$6.3 billion writedown on its nuclear unit earlier this month, the conglomerate says it is now prepared to sell a majority stake or even all of the NAND memory unit, which makes chips for mobiles and tablets and is its most valuable business. Previously it had planned to sell 19.9 percent.

Toshiba wants to restart the sale process as soon as possible and may sell to multiple buyers rather than one bidder with interest already received from investment funds, other chipmakers and client companies, said the source who was not authorised to talk to the media and declined to be identified.

The sale "is the best and the only way Toshiba can raise a large amount of funds and wipe out concerns about its credit risk," the source said, adding that the sale should be completed by the end of March next year.

Toshiba has not decided on the size of the stake to be sold, preferring to focus on the amount that can be raised, the source said. He also said the company would like to retain a one-third holding that would give it a degree of control over the business.

A Toshiba spokeswoman said the company cannot comment on the specifics of the sale process.

When it was offering a 19.9 percent stake, the company received offers ranging from 200 billion yen to as much as 400 billion yen, a source said told Reuters earlier.

The Japanese industrial conglomerate is unable to raise funds through new share issues because the Tokyo Stock Exchange put it on a watchlist following a US$1.3 billion accounting scandal in 2015.

Toshiba's share were two percent higher in morning trade compared with a 0.3 percent gain in the benchmark Nikkei 225 index.