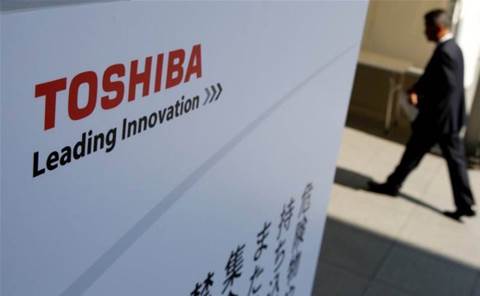 Toshiba has chosen a consortium of Japanese government investors and Bain Capital as the preferred bidder for its chip business, aiming to seal a deal worth some US$18 billion by next week as it scrambles for funds to cover massive losses.

But prospects for a clean early resolution to the sale of the world's No. 2 producer of NAND flash chips remain unclear as Western Digital, its chips business partner that has launched legal action to prevent a deal without its consent, was not part of the winning group.

The consortium has offered around 2 trillion yen (US$18 billion), a Toshiba spokesman said. That appeared to be somewhat less than a 2.2 trillion yen offer from a rival bidder, US chipmaker Broadcom and its partner US private equity firm Silver Lake.

But the government-Bain consortium, while hastily and awkwardly conceived, has been seen as the most likely suitor by many analysts as it would automatically gain an implicit stamp of approval from the Japanese government which is keen to keep key semiconductor technology under domestic control.

While some analysts believe that talks over the hotly contested deal have been so complex that only a government-led solution is viable, others doubt that the group will provide the necessary leadership the chip unit needs.

"There are many parties involved in this consortium," said Atsushi Osanai, a professor at Waseda University Business School.

"It has undergone so many twists and turns during its formation process, that I'm sceptical about whether it can promptly make bold decisions. In that sense, Broadcom or Foxconn would be better suited."

In addition to Bain, the group includes state-backed fund, the Innovation Network Corp of Japan and the Development Bank of Japan. South Korean chipmaker SK Hynix Inc and the core banking unit of the Mitsubishi UFJ Financial Group Inc are in talks to provide financing.

Toshiba said in a statement it took into consideration concern about technology transfers, job security for its domestic workforce and prospects of clearing regulatory reviews in its decision.

Following the announcement, Western Digital reasserted in a statement that Toshiba was in breach of their joint venture contracts and said that a US court hearing on its request for an injunction was scheduled for July 14. A representative for Broadcom was not immediately available for comment. Silver Lake declined to comment.

Foxconn did not immediately respond to a request for comment.

Toshiba is rushing to sell the unit to cover billions of dollars in cost overruns at its now-bankrupt Westinghouse nuclear unit and to dig itself out negative shareholders' equity that could lead to a delisting.

Toshiba's shares were 1 percent lower in afternoon trade, compared with a 0.4 percent decline in the broader market.