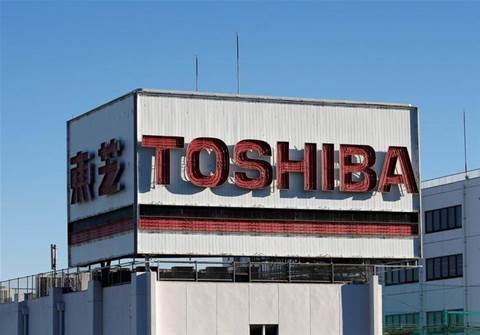 Toshiba said on Thursday it had signed an US$18 billion deal to sell its chip unit to a consortium led by Bain Capital LP, overcoming a key - albeit not its last - hurdle as it scrambles for funds to stave off a potential delisting.

But in an inauspicious sign, a Tokyo news conference on the deal was cancelled, with Bain saying the consortium could not form a consensus on whether to brief media - underscoring fears that the 8-member group contained too many competing interests for it to work well.

The sale of the unit - the world's second biggest producer of NAND chips - was agreed last week after a tortuous auction process but the signing was delayed because consortium member Apple demanded new terms on chip supply, sources familiar with the matter have said.

"This consortium has so many members that it is going to be hard to come to consensus and agree on who's going to take the initiative," said Hideki Yasuda at Ace Research Institute, but he added that if the sale was successfully completed it would reduce a lot of risks for Toshiba.

Although the news conference was cancelled just minutes before it was due to begin, the head of Bain Capital in Japan, Yuji Sugimoto, said the disagreements over the briefing had no bearing on the contract. He did not disclose which members had objected to the news conference.

The deal - which must also overcome legal challenges - will see Toshiba reinvest in the unit and together with Hoya Corp, a maker of parts for chip devices, Japanese firms will hold more than 50 percent of the business - a keen wish of the Japanese government.

A Japanese state-backed fund and bank have also expressed their interest in investing in the future subject to certain conditions, Toshiba said in a statement.

Pressure from the Japanese government, changing alliances among suitors and a slew of revised bids has drawn out the auction over nine months - heightening the risk that the deal may not close before the end of Japan's financial year in March as regulatory reviews usually take at least six months.

If the deal does not close before then, Toshiba - hurt by liabilities at is now bankrupt nuclear unit Westinghouse - is likely to end a second consecutive year in negative net worth, putting pressure on the Tokyo Stock Exchange to strip it of its listing status.

The sale also faces legal challenges from Western Digital, Toshiba's chip venture partner and rejected suitor, which is seeking an injunction to block any deal that does not have its consent.

Western Digital, one of world's leading makers of hard disk drives, paid some US$16 billion last year to acquire SanDisk, Toshiba's chip joint venture partner since 2000. It sees chips as a key pillar of growth and is desperate to keep the business out of the hands of rival chipmakers.

The acrimonious squabbling over Toshiba's chip unit also highlights the critical importance of NAND memory chips, as data storage is key to most next-generation technologies from artificial intelligence and autonomous driving to the internet of things.

In addition to Apple, Bain's consortium includes South Korean chipmaker SK Hynix, as well as Dell, Seagate Technology and Kingston Technology - all of which want access to NAND technology.

Seagate said in statement that with its participation, it expects to enter into a long-term supply agreement that ensures sufficient raw NAND for its solid state drives or SSDs, which are faster and lighter than hard disk drives.

Under the deal, Toshiba will have 40.2 percent of voting rights in the chip unit and Hoya will own 9.9 percent. The four US tech firms will not have voting rights.

In a move to address anti-trust concerns that may come up in a regulatory review, Toshiba said SK Hynix would be firewalled from accessing proprietary information that belonged to the chip unit and for 10 years, would not be permitted to own more than 15 percent of voting rights.