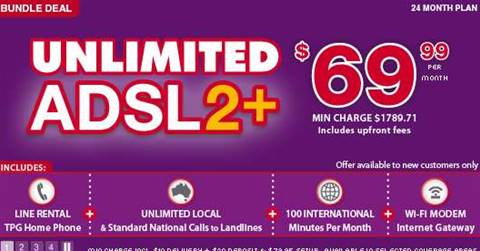 Internet service provider TPG has been hit with a $2 million fine for running "seriously misleading" ads for its unlimited ADSL products over more than a year.

In a decision handed down last week but made public today, Federal Court Justice Bernard Murphy found TPG failed to notify potential customers of the true cost of its Unlimited ADSL2+ plans.

The plans were advertised between October 2010 and December 2011 for $29.99 per month. However, the plans required users to purchase an additional $30 home line rental product in order to qualify, bringing the total cost to $59.99 per month.

The Federal Court also found some of the advertisements did not properly present the minimum charge associated with the plan.

TPG was fined a total $600,000 for the first phase of advertising over television, radio, print and outdoor, with a further $1.4 million fine imposed for a second phase using similar wording.

The Australian Competition and Consumer Commission had sought a heavier fine than that meted out to Optus for its Think Bigger ads in July 2011 on the basis, according to Justice Murphy, that TPG ran a longer ad campaign and generated more profit.

Optus' fine was later reduced to $3.61 million on appeal.

Though TPG contended it could not provide any accurate break-down on the profit of its Unlimited campaign, it indicated potential profit of $8.15 million over the period from revenues of $59.3 million for the unlimited product. It had spent approximately $8.9 million on the ad campaign.

However, Justice Murphy disallowed the ACCC's arguments and said the total penalty imposed on TPG should be lower as it was not "the worst possible case".

"There can be little doubt that the advertisements in question, which ran for more than 13 months and were presented across multiple media ... are likely to have had an enduring impact on the class of consumers to whom they was directed," Justice Murphy stated.

"It is also likely that the separate advertisements in the different media reinforced each other."

However, TPG will still have to issue corrective notices to each of the customers who adopted the internet service over the 13-month period, issue corrections on its website and establish a compliance program subjecting it to independent audits of advertising practices.

The advertisements were aired over the period despite a previous undertaking given to the ACCC in February 2009 over a similar unlimited product.

Justice Murphy rejected the ACCC's claims the ongoing use of misleading ads indicated a "non-compliant corporate culture" at TPG.

"On the evidence I can reach no firm view about TPG's culture of compliance. I can look only to the result and TPG argues that what occurred was an error of judgment," he said.

"It follows that I am not persuaded that TPG merely paid lip service to compliance or that there is no culture of compliance."

Though not victorious on all accounts, the court ruling this week still comes as an overall win for the competition watchdog, which had been denied an initial attempt to ban the ads two months into the campaign in December 2010.

"This decision should send a strong warning to telecommunications and internet providers that they cannot continue to take risks in their advertising or they could end up in court and be exposed to substantial penalties," said Rod Sims, chairman of the ACCC.