Turnbull’s ‘agile’ government borrows from his IT past 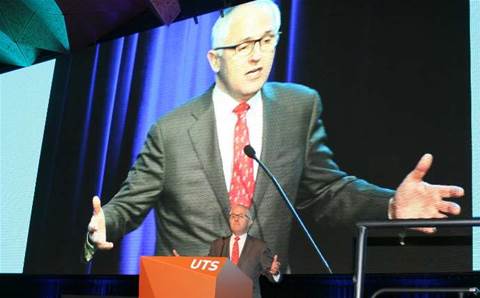 Malcolm Turnbull has had many high-profile careers, including as a barrister, merchant banker and aspiring media proprietor. By far his most lucrative, however, was in the IT industry.

Turnbull was a key early investor and board chairman of Australia’s first large commercial internet service provider, OzEmail. His 1994 investment of A$500,000 reportedly made him A$60 million when sold five years later.

His investment in IT and other technology-based start-ups continued throughout the 2000s, only ending in 2012. Even after this, his involvement with the IT industry continued, as first the shadow Communications Minister and then the Communications Minister under Tony Abbott. Very few senior politicians anywhere in the world have had anything like the breadth of professional experience in these fields that Turnbull has.

Given this, it is unsurprising, if striking, how much of Turnbull’s public pitch for Liberal leadership used concepts taken straight from the technology industry.

Turnbull gave two speeches on Monday: one announcing his challenge; the second after the party room vote. In both, he spoke of an “agile” country.

In the first he stated:

Our values of free enterprise, of individual initiative, of freedom, this is what you need to be a successful, agile economy in 2015.

And following his victory, he said:

The Australia of the future has to be a nation that is agile, that is innovative, that is creative. We can’t be defensive, we can’t futureproof ourselves. We have to recognise that the disruption that we see driven by technology, the volatility in change is our friend if we are agile and smart enough to take advantage of it.

To an IT professional, an “agile” approach has a very particular meaning, one that Turnbull is clearly aware of. On the creation of the Digital Transformation Office, which aims to improve the notoriously poor online services of the federal government, Turnbull posted a “policy FAQ” to his personal website:

The DTO will unwind complexity and deliver services that are simpler and faster for the customer. Government services are often unnecessarily complex –- the DTO will focus on the needs of the customer and present information in a crisp, straightforward way.

It will achieve this through agile delivery rather than the more traditional waterfall approach to development. This means that services will be delivered quickly and improved over time through collaboration and customer feedback.

Failing ‘waterfalls’ and an ‘agile’ response

In the IT world, “agile” methods are a family of approaches developed in the late 1980s and early 1990s for managing IT projects. At the time, most IT projects were managed using a “waterfall” approach to development. The ‘waterfall’ model in IT. Peter Kemp/Paul Smith/Wikimedia, CC BY

In the waterfall approach, the first step is to specify in exacting detail what the system has to do. The resulting requirements document is then handed over to designers, who create a design that specifies how a system can be built, which (in theory) satisfies the requirements. The design is then implemented, tested and deployed.

Unfortunately, the waterfall approach works very poorly most of the time because getting requirements “right” at the very start of a project turns out to be a wickedly hard problem.

In the rare case that they were indeed “right” when the project was initially commenced, by the time a waterfall project was delivered they had often been overtaken by events. To take one well-known example, many elaborate web sites designed for desktop computers required massive revisions to be usable on smartphones and tablet computers.

Agile methods emphasise incremental development of systems, with changes to the system requirements not only expected but embraced. One well-known agile method is Scrum.

The four principles of the agile manifesto

In a Scrum project, a small team works to deliver an incrementally-improved version of their product (which may or may not be a software project) at regular intervals of one to four weeks.

Goals are fixed only within each interval, and are negotiated between a “product owner”, who represents the customers and users of the system, and the team building them. As soon as is possible, functional parts of the system are put into use and the feedback from those users quickly begins to guide future development.

In private sector IT, virtually every company professes to use some variant of agile methods and they are increasingly widely adopted in businesses outside IT.

So what might an agile-influenced government mean in practice? Government IT procurement, and the public sector more broadly, is far less comfortable with agile approaches than the private sector, which is undoubtedly why Turnbull as Communications Minister sponsored the creation of the DTO.

It would not be at all surprising to see Turnbull as Prime Minister attempt to encourage broader adoption of agile methods across the public service, for instance.

But Turnbull’s comments speak to an enthusiasm for agility across the broader community, not just in government. While the form this might take extends well beyond my own expertise as an IT academic, it does hint at a government more interested in encouraging the rise of new businesses than defending the profitability of existing ones.

Above all else, agile methods put the customer, and identifying and responding to their needs, at the very heart of product development. To what extent, and how, this is applied to the business of a Turnbull government will be fascinating to see.