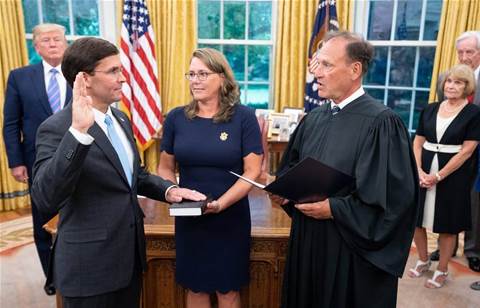 Within two weeks of President Trump wading into the Pentagon's JEDI cloud controversy, his recently confirmed defense secretary, Mark Esper, has implemented a review of the military's process for procuring its potentially US$10 billion commercial cloud transformation.

A spokesperson for the Defense Department, Elissa Smith, said Thursday the selection of an enterprise cloud vendor, previously expected sometime this month, will not come down until the examination is done.

"Keeping his promise to Members of Congress and the American public, Secretary Esper is looking at the Joint Enterprise Defense Infrastructure (JEDI) program. No decision will be made on the program until he has completed his examination," she said, not providing a time-frame.

The review was prompted by President Trump, who shocked the industry when he told reporters at the White House on 18 July that companies with unsuccessful bids had convinced him to intervene in the process.

"Some of the greatest companies in the world are complaining about it," the president said during a sit-down with the Prime Minister of the Netherlands, specifically citing Microsoft, Oracle and IBM.

Microsoft is one of the finalists, along with Amazon Web Services, for the winner-take-all contract to provide the Pentagon's General Purpose Cloud. If the military exercises every option in the contract over ten years, that could amount to a US$10 billion transaction.

Oracle's legal challenge, as well as outreach to Congress, has put the most heat on the process. Oracle declined to comment on this latest development.

Earlier this week, after a federal judge released a comprehensive decision rejecting Oracle's legal challenge, the same Pentagon spokesperson blasted Oracle's accusations regarding the RFP as "the subject of poorly-informed and often manipulative speculation."

The president's comments come less than a week after that judge threw out Oracle's lawsuit, and previous Government Accountability Office investigations prompted by Oracle and IBM concluded no improprieties violated the integrity of the RFP process.

Trump repeated Oracle's refrain that the contract was crafted to favor AWS, and said he was "getting tremendous complaints about the contract with the Pentagon and with Amazon."

"Secretary Esper is committed to ensuring our warfighters have the best capabilities, including Artificial Intelligence, to remain the most lethal force in the world, while safeguarding taxpayer dollars," Smith said.

Esper is a former Aerospace lobbyist who Trump nominated for Secretary of the Army in 2017, then Secretary of Defense.

Bloomberg, citing anonymous sources, reported earlier in the month that Trump had recently demanded more information about how the JEDI requirements were created by military officials, and that he was thinking about intervening in the procurement process.

After a year of bitter industry infighting over the contract, the Joint Enterprise Defense Infrastructure initiative looked close to selecting a hyper-scale cloud vendor to supply all branches of the armed services with computing and storage resources, as well as advanced capabilities around artificial intelligence, security and Internet of Things.

Judge Eric Bruggink, in ruling in favor of the government and Amazon Web Services, which voluntarily joined the case as a co-defendant to protect its own interests, cleared what appeared the last potential obstacle to a final award.

Even before that legal ruling came down from the US Court of Federal Claims, Pentagon CIO Dana Deasy told reporters that the "source selection process" would be done by the end of August.

It was important for the military's plan to adopt a commercial cloud platform to not incur more delays, he said.

President Trump has often criticized Amazon and its CEO Jeff Bezos in attacks stemming from Bezos' ownership of The Washington Post, a newspaper unaffiliated with Amazon that the president believes is unduly critical of his administration.

CRN USA has reached out to Microsoft and AWS for comment.