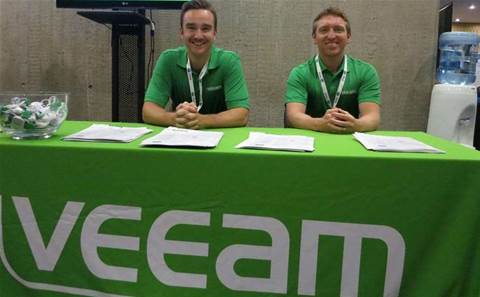 Veeam Software, which develops data protection technology for cloud and virtualised environments, unveiled a major shakeup in its leadership team Tuesday US time, including the hiring of VMware executive Peter McKay as its new president and chief operating officer.

William Largent, Veeam's executive vice president, will be the company's new CEO, and will move to Veeam's global headquarters in Baar, Switzerland, the company said.

McKay, who is leaving VMware as its senior vice president and general manager of Americas sales, will report directly to Largent, the company said.

Veeam's co-founders Ratmir Timashev and Andrie Baronov will remain with the company. Timashev, who serves as Veeam president and CEO, will step down from that role but will remain one of the company's directors. Baronov, vice president of software engineering, will become Veeam's chief technology officer.

Both will play what the company termed active roles focusing on market strategy and new product development.

Veeam, which is on the road to becoming a $500 million company, confirmed that all of the executive changes are effective 15 July.

Peter Ruchatz, Veeam chief marketing officer, told CRN USA that Veeam and VMware have a great relationship: "According to an IDC survey, 70 percent of our customers plan to expand their VMware footprint because they use Veeam."

Veeam has been growing quickly and is at a point where it needs someone with experience with both startups and enterprise companies to take it to the next phase, Ruchatz said.

"We're entering a new growth phase, and plan to be a 1 billion-dollar company by 2019," he said. "About 70 percent of Fortune 500 companies are using Veeam, but we are now ramping up enterprise sales. Also, with the cloud, we are now offering subscription pricing, which is new to our sales team. We need someone to deal with both subscription and perpetual licensing."

All that adds up to a need for a seasoned executive to help Veeam's growth, Ruchatz said.

"This is a good time to bring in new management with experience with startups and who also ran successful companies," he said. "McKay came to VMware via an acquisition, but moved quick through the ranks to take on new responsibilities. He has a track record at running companies at scale, but also has the DNA to run a startup."

A VMware spokesperson confirmed via an email to CRN USA that McKay decided to leave VMware to pursue a new career opportunity.

"McKay will continue leading the Americas Region through July 15. A search is underway for a new leader for the Americas, with a process that will include a selection of highly-qualified internal and external candidates. VMware leadership will work to ensure a smooth transition with no impact to our customer and partner relationships. The company thanks Peter for his service, and wishes him well in his future endeavor," the VMware spokesperson wrote.

McKay joined VMware in October 2013 when VMware acquired Desktone, a developer of desktop-as-a-service technology. He served as CEO of Desktone at the time, and initially served at vice president of sales for end-user computing.

This is not the first time that Veeam, which focuses its data protection software on VMware-based virtualised environments, has raided VMware, with which it is both a partner and a competitor, for executives.

Veeam in March appointed Kevin Rooney, who at the time managed the cloud partner organisation for VMware's vCloud Air public cloud service, as its vice president of North America channel sales, where he is responsible for driving channel sales strategy and growing the company's Veeam ProPartner program.

Veeam is one of several storage vendors partnering with VMware on the storage side. However, the two nearly had a major falling out in 2014 when Veeam was forced to cancel its participation in the VMware Partner Exchange conference.

VMware is majority owned by EMC, which is in the process of being acquired by Dell. That, according to one Veeam channel partner who preferred to remain anonymous, could be a factor in McKay's move to Veeam.

"We're seeing a shift in executives between EMC and VMware, and from EMC and VMware to other vendors," the solution provider told CRN USA. "There's a lot of uncertainty at those two companies."

"We are at the cusp of a major digital revolution and as enterprises look to harness the power of the cloud and keep pace with changing user demands, 24.7.365 Availability is no longer an after-thought; today, it is a strategic priority. That's why I am here. Veeam has always been a company synonymous with innovation and customer satisfaction. Not many companies are as exciting as Veeam, and I am honoured to be joining the team and helping steer it to the next stage of its growth," he said in the statement.