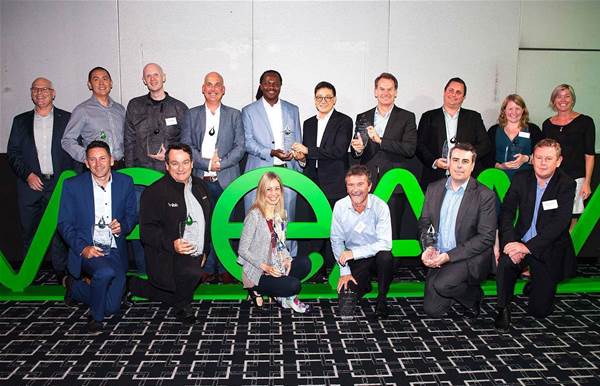 Veeam has revealed is top performing Australian and New Zealand partners for 2017 and named Telstra as its Australian ProPartner of the year.

"[Telstra] continues to deliver strong growth in 2017 with a focus on complete solutions built around our key joint alliances, from Cisco, NetApp and Pure Storage," Jurisic said on the night. "A clear focus on customer outcomes combined with their reach and strategy for partnering has ensured that they are the winner this year."

The awards recognised 14 of Veeam’s high-achieving ANZ partners across a number of categories. In addition to Telstra claiming the titular win, six other Australian IT companies were recognised.

Veeam's Asia-Pacific director of cloud and service providers Asanga Wanigatunga said the company's cloud business had grown 80 percent year-on-year in Australia and New Zealand, and that its VCSP business, which deals with companies working in the private cloud space, made up about 60 percent that cloud growth.

"A lot of that growth has to do with the service providers that we not only signed up last year but those we've signed up in prior years who are growing," he said.

“Our partners enable us to provide data and backup solutions for so many businesses across Australia and New Zealand to ensure always-on access to these applications,” he said.

"We are excited to recognise and honour these Australian and New Zealand partners with our highest achievement awards.”

Growth in Australia and New Zealand

The awards event follows updates to Veeam’s Australian and New Zealand partner program made last this year, when it introduced additional deal reg opportunities for silver, gold and platinum ProPartners, as well as bumping up the revenue requirements for its partner tiers.

“The program that we have introduced is about the reward of additional margin for partners who actually go out there and identify new business customers to Veeam. We are adding the additional value of a new business opportunity,” Mitchell said.

“The incentive is not just to work with us to develop and grow an opportunity but about creating new opportunities for themselves too.”

Veeam’s 2017 full-year financial results, released in January, revealed the company grew its ANZ customer count by 19 percent to 9531 customers in the region.

Mitchell told CRN the plan this year was to double that growth rate of customers to about 40 percent, a plan he said would be underpinned by a few key reasons.

"Our product line is expanding. It's more than just backup and replication for virtualised environments, which is where the company started. We're addressing multi-cloud environments these days, physical environments as well. We just released a product called Veeam Orchestrator that is associated with monitoring and orchestrating changes from one environment to another," he said.

Mitchell also said growth would follow Veeam's updated vendor alliances initiatives with companies like HPE, which the vendor has a joint reseller agreement with.

"That's really started to pay some big dividends for our partners and for ourselves around the growth of actual deals being done and pipeline being developed," he said.

"The other thing that will be very significant is that we're also seeing a lot more pipeline and deals being closed higher in the enterprise."

The vendor also increased its number of ProPartners in the region to 2731, while growing its ProPartner count to 51,000 worldwide.

Grow your software revenue by selling these 5 affordable, essential tools for the modern workplace
By Michael Jenkin
Mar 22 2018
7:59AM