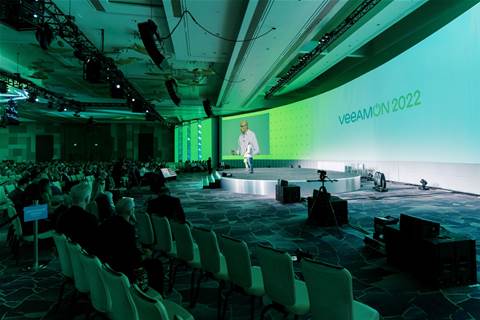 The move to expand its flagship software comes as Veeam for the first time is in a statistical tie with rival Dell Technologies as the world’s biggest data protection software vendor, said Veeam CTO and Senior Vice President of Product Strategy Danny Allan, who cited a recent IDC report when talking with press and analysts at the conference.

This comes after five straight years as the largest provider in the Europe, Middle East, and Africa (EMEA) markets, Allan said. “We’re very excited,” he said. “Clearly the business is growing faster.”

Veeam currently has about 449,000 customers worldwide and is seeing about 52 percent of its revenue come from the enterprise, Allan said.

“So we’re not just growing across the SMB or midmarket. ... Big enterprise customers are using us not only for cloud acceleration but also for backup modernization.”

The first is accelerating what businesses are doing in the cloud, especially as businesses increasingly adopt a cloud-first strategy, Cashwell said during his VeeamON presentation. The second is cyber resiliency, ensuring that a company‘s data is not just protected against an attack, but is also able to be recovered if an attack is successful. The third is optimization to help improve customer efficiency at scale, he said.

On the cloud acceleration side, Veeam has been involved in the cloud for years in such areas as writing data to the hyperscalers, copying and sending data to object storage, and doing native-cloud backups in AWS, Azure, and Google Cloud, all of which is happening as customers adopt a cloud-first strategy, Cashwell said.

“When we think about how do we get to the cloud, in more cases than not, it‘s been a lift-and-shift type operation,” he said. “We take what we have on-premises, we move it up to the cloud. And we try to treat it the same way we did on-prem, which usually leads to a lot of inefficiencies.”

At the same time, businesses need to consider how to protect born-in-the-cloud workloads, Cashwell said.

“We have an opportunity to modernize when we go to the cloud,” he said. “It should be something we think about as we‘re going, not once we’re already there. ... If we‘re going to go to the cloud, and we’re going to adopt this as the platform of the future, we need to play by the rules and act accordingly inside of that ecosystem.”

Veeam Backup & Recovery v12 will help businesses move quickly to the cloud in a variety of ways, including direct writes to object storage and cloud-based agents, Cashwell said.

“So any backup can write directly to object storage,” he said. “We‘d already been doing this with our cloud-native products, but now you can do this to on-premises object storage as well. [You can] see how much more capability we have, how much more headroom we have, to grow when it comes to object storage versus block. So this is a first step and a huge step in that direction, especially those of you that are starting to use object [storage] more.”

v12 also includes app-consistent cloud backups, cloud-native deployment, as well as continuous data protection capabilities that allow that service to be delivered at a higher level than in the past, Cashwell said.

The second key to Veeam Backup & Recovery v12 is security, which Veeam refers to as cyber resiliency, Cashwell said.

“Backups aren‘t safe,” he said. “I don’t know if you guys know this, but backups are now on the attack vector of cyber threats. It was a sad day when that news came out because, again, backups are your last line of defence. That’s the last thing you‘ve got when everything’s gone. And if you can‘t trust those, you’re in a bad place.”

There‘s huge pressure out there from customers to pay ransoms, Cashwell said.

“It‘s really scary, from a customer perspective, or from a business perspective when you have to stop and think, ’Can I get back into business faster, have less data loss, less brand damage, by just paying the ransom versus using the backups that I‘ve already set up?’” he said. “We say no to that. And then finally, if you did pay the ransom, and you dealt with this de-encryption of your data, can you trust it?”

To address this, Veeam is adding immutable backups that ensure data backups are safe from attacks after they are created, Cashwell said.

“This data cannot be changed, appended to, deleted, edited, nothing, until the time runs out that was set for it,” he said. “And we‘re recommending immutability everywhere. So we’ve taken some great strides with a hardened repository that we supply as Veeam to do your primary backups, so that you can install it even easier, you can upgrade it even easier, you get better performance out of it.”

The new version can also monitor for unauthorized activity and show which files could be impacted and tell users that it is time to start recovering files, Cashwell said. It also supports multi-factor authentication, secure accounts like gMSA (global managed security accounts), and secure environments like Kerberos network authentication and IPv6, he said.

Finally, Veeam Backup & Recovery v12 is aimed at optimizing data protection efficiency at scale. This starts with simplifying protection management across the board to enable businesses to do more with all their production jobs, Cashwell said.

“You can do granular workload control,” he said. “You can do scheduling control. You can edit these things without having to delete and recreate jobs. They‘re much more policy-like in how they operate.”

v12 also helps to scale and optimize backups even more by taking advantage of the breakdown of jobs inside a larger job to customize how they are handled, Cashwell said. For instance, Veeam is helping database administrators manage their database backups with a new plug-in for Microsoft SQL Server to join the Oracle and SAP HANA plug-ins it offered previously. It also supports PostgreSQL for backup administrators who do not have ownership of a database or application. Veeam Backup and Replication v12 now also supports simplified NAS unstructured data backups, he said.