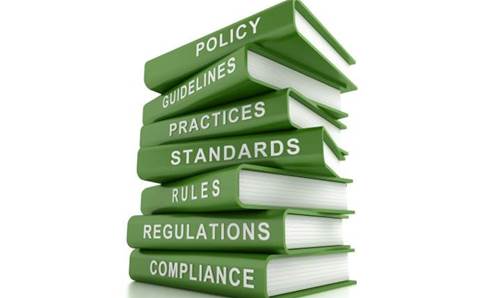 Oracle and IBM have been singled out as the vendors with the most aggressive behaviour and biggest focus on short-term revenue when it comes to software audits.

Oracle was voted the worst vendor during the audit process, followed in order by IBM then Attachmate, which has now been renamed Microfocus, according to UK-headquartered Campaign for Clear Licensing's (CCL) survey.

The worst software vendors block competition and innovation through extensive audits, according to the survey. An average audit can take 194 working hours and more than seven months to resolve. 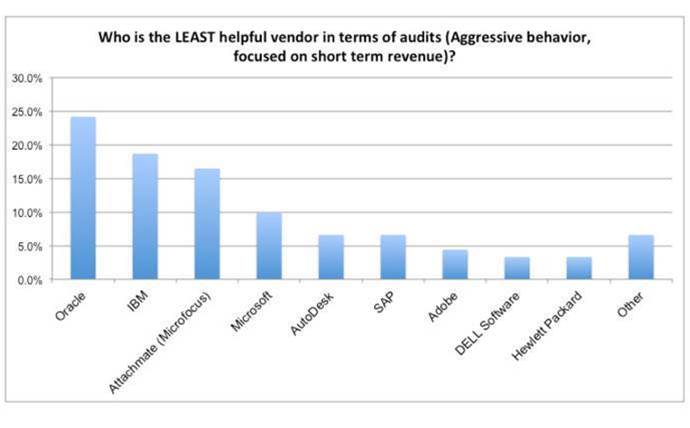 "IT departments are wasting time trying to interpret licensing terms and defending audits rather than exploring competitive solutions or reviewing their true requirements," according to the survey.

The other side of the issue is that IT departments are mostly reactive to software audits and have not allocated enough resources for managing software as an asset, despite the "massive amount" spent annually on software, maintenance and subscriptions, according to CCL.

The survey also asked which vendor was the most helpful with audits. Microsoft topped the list, followed by IBM, Autodesk, Adobe, Oracle, HP, Microfocus, SAP and CA Technologies.

This was judged on being constructive, taking the long-term view and offering help and guidance. 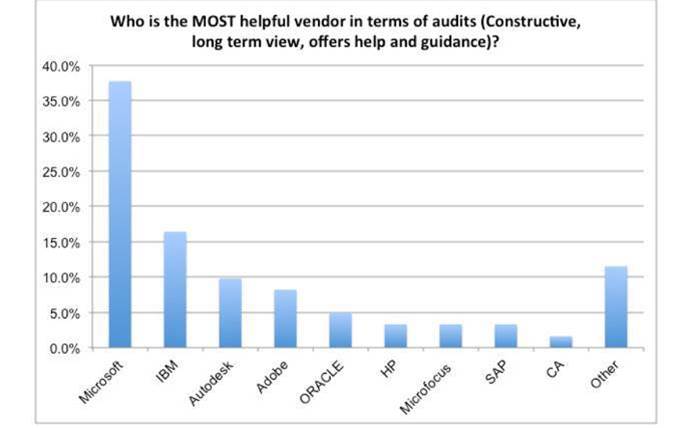 CCL said Microsoft was friendlier but was still very time-consuming due to its review approach, "whereby previous compliance misdemeanours might be overlooked as long as the customer adopts the software publisher’s strategic products, in the case of Microsoft in 2016: Office 365 and Azure".

"Whilst less aggressive, this approach is still anti-competitive, and it assumes [Microsoft's] cloud solution is the most viable option."

CCL urged organisations to adopt proactive software asset management practices so as not to be exposed to the "whims of the software vendor's commercial goals".

"The Campaign for Clear Licensing also calls upon worldwide governments and lawmakers to review the activities of large software publishers to ensure they are not abusing their dominant position to stifle competition," the report said.

The Campaign for Clear Licensing is a not-for-profit organisation in favour of software buyers.