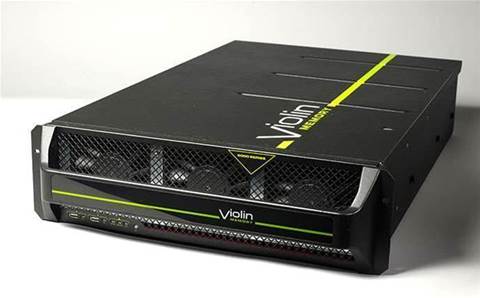 Flash storage manufacturer Violin Memory has filed a voluntary petition for reorganisation under Chapter 11 of the US Bankruptcy code as it looks for a buyer.

The company plans to "streamline its operations and balance sheet, while simultaneously pursuing a sale of its business to a buyer committed to supporting its core customer base".

Violin will hold an auction in early January for the business.

The company, which was founded in 2005 and treated as a hot startup in the then-nascent flash sector, has fallen on hard times in recent years.

The company cut 20 percent of its workforce in 2014 following a lacklustre initial public offering. Violin watched its share price tumble from US$7.50 at its 2013 IPO to 5 cents before filing for bankruptcy this week.

Violin's all-flash peers Nimble Storage and Pure Storage have fared somewhat better, though both are also well down on their listing price. Nimble also ran its IPO in 2013 at US$21, with shares soaring to a high of US$52.74 before falling steadily to its current price of US$7.96. Pure Storage went public in late 2015 at US$17 and is now trading at US$11.92.

Violin chief executive Kevin A DeNuccio said: "We are taking this action, which should conclude by the end of January 2017, to bolster Violin's ability to serve the needs of its customers.

"Violin intends to continue to sell solutions to customers and prospects as well as service and support customers during this restructuring."