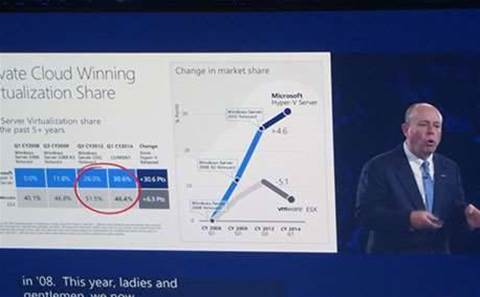 Microsoft chief operating officer Kevin Turner is famed for not pulling any punches with his keynotes and he didn't disappoint at this year's World Partner Conference (WPC).

Turner was the final speaker in the first day's Vision Keynote series, addressing a crowd already fired up by previous speakers, such as Scott Guthrie, executive vice president of the cloud and enterprise group, who won some of the day's biggest cheers when he revealed that Office 365 has now topped $2.5 billion of revenue.

The productivity suite was already the fastest-growing business in Microsoft's history to reach $1 billion.

One partner, Nicki Page, chief executive of Sydney-based Breeze, said: "It is definitely a new Microsoft. They are really pushing innovation again. They are recognising they have been behind on innovation. That is clear from Satya Nadella's messaging to staff – having the courage to innovate again."

In his keynote, Turner said "everything is on the table" in Microsoft's quest to transform the business. He conceded that "getting into first-party hardware [with the Surface and Nokia buyout] was not an easy decision", adding that "we are having third-party discussions today that we wouldn't have had a few years ago".

But while he admitted Microsoft had to "think like a disrupter" in this mobile and cloud world – a world in which the likes of Google and Amazon have advantages in key areas – he added that "the opportunity is much bigger than we ever had in the past".

"They think the cloud market will be a $191 billion market opportunity by 2020. Our cloud momentum is off the hook. I am so proud of the progress we have collectively made in driving the cloud."

Competitors new and old came in for a spray in Turners rabble-rousing presentation. He squared up against VMware, saying that Microsoft has "eaten their lunch" in x86 server virtualisation.

He pointed to stats that show Microsoft's Hyper-V has grown to a 30.6 percent share of the sector while VMware is now only at a 46.4 percent share. "We are 4x cheaper with better technology versus VMware."

Long-term rival Apple came in for some swings, specifically around the quality of the new Surface Pro 3 against the Macbook Air and the iPad.

Turner showed off the Twitter photo that went viral earlier this year, in which Apple chief executive Tim Cook seemed to show Windows running on the Macs in Apple's production facility.

But Apple also got some love during the keynote address, when Julia White, general manager of the Office division, presented Office for iPad – a display of cooperation between with Apple that many have said would have been unheard of in the Steve Ballmer era.

Microsoft's public enemy number one, Google, wasn't safe from Turner's attention, with the COO announcing that Microsoft had "rescued" 785 customers back from Google, while taking a few digs at the search giant's approach to customer privacy and "snooping".

Even the National Security Agency copped some flak, as Turner revealed Microsoft's ambitions in the security space. He said Microsoft pledged never to build backdoors and said the company had never provided business or government data in response to a national security order.

"Microsoft will contest any attempt by the US government to disclose customer content stored exclusively overseas," according to Turner's presentation.