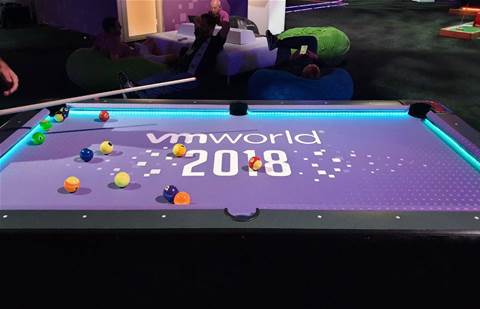 VMware has pitched the new “Platinum” version of its flagship vSphere product as a way for partners to expand into security sales and build deeper relationships with end customers.

vSphere Platinum bundles the company’s recently-released AppDefence security tool to the server virtualisation and private cloud suite. AppDefence works by establishing a baseline for a virtual machine’s expected behaviour and then checking to see if the VM diverges from that template.

If the VM runs an executable that isn’t expected or uses network ports that weren’t pre-defined, AppDefence can stop the VM working, or isolate it, so that admins can check it’s not been infected with malware or otherwise compromised.

AppDefence has been on sale for a year, but until this week the SaaS service only ran in VMware’s North American cloud. It’s since become available in Europe and Australia.

The timing of vSphere Platinum’s release coincides neatly with the imminent end of full support for vSphere 5.5, which takes place on 19 September, 2018. VMware encourages users to upgrade to either vSphere 6.5 or 6.7 as soon as possible. And with the release of vSphere Platinum, the company hopes partners will encourage upgrades to step up to adopt AppDefence.

As explained to CRN by VMware’s s vice president of product marketing for the company’s networking and security business Unit, VMware hopes partners who are already talking to end-customers about a vSphere upgrade to recommend vSphere Platinum.

Doing so will not only see them sell higher-priced products (Platinum is more expensive than vSphere enterprise) but also let them start a conversation about security.

If end-customers acquire AppDefence, Ulander suggested, resellers that make such sales will be able to stage the more wide-ranging discussions that come with security considerations.
They’ll also be selling SaaS to end-customers that may not be inclined to use cloud services.

As we reported yesterday, VMware will soon reform its channel program to reflect its increasing focus on SaaS and to move its partners beyond reliance on vSphere. By bundling SaaS, the new Platinum version of the product appears to offer a bridge between the old and new regimes.

Simon Sharwood traveled to VMworld as a guest of VMware