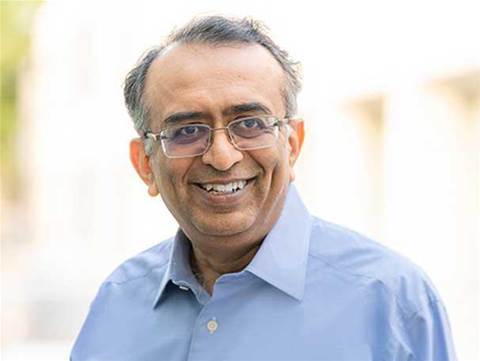 Raghuram has an enormous wealth of knowledge about VMware from both a products and innovation standpoint as well as culture, having first joined the company in 2003 overseeing VMware’s ESX and vSphere, which would become VMware’s flagship product.

After speaking with Raghuram this week and reviewing VMware’s filings with the U.S. Security and Exchange Commission, CRN learned several important things that you should know, which will shape the virtualization and software company’s future.

Here are eight things you need to know about Raghuram around who he reports to, his new salary as CEO and what the future holds for VMware with Raghuram at its helm.

As the new CEO effective June 1, Raghu Raghuram’s will receive an annual salary of US$1 million, according to a VMware 8-K filing with the SEC.

Raghuram, 58, will also be eligible to participate in VMware’s benefit plans and programs as well as the company’s Executive Bonus Plan. He will be eligible for an annual target bonus opportunity of 150 percent of his base pay starting on June 1, 2021. Raghuram will report directly to VMware’s board of directors

In VMware’s SEC filing, the company says CEO Raghuram will report directly to the VMware board of directors. As the new leader of VMware, he will be nominated for election to the board.

However, it is key to note that VMware’s chairman of the board is, and will continue to be, Michael Dell (pictured) -- founder, chairman and CEO of Dell Technologies.

However, with VMware set to become as an independent company for the first time since 2004, Raghuram is excited about the new possibilities and opportunities ahead. VMware to become the ‘Switzerland of multi-cloud’

Raghuram told CRN this week his bullish plans for VMware after the Dell Technologies spin-off, which will make VMware a standalone company for the first time in 17 years.

“The fact that we’re getting spun out of Dell, you can almost think of us as the Switzerland of multi-cloud,” said Raghuram in an interview with CRN. “We’re hardware agnostic, cloud agnostic and we can really focus on helping our customers run their applications and run their IT however they want to run it. We’re providing the tools to help them build new applications faster, run them across all of these locations, manage these applications, secure and protect them, etc. – that’s what we’re trying to do in a nutshell.”

“The fact that we are an independent company enables other [vendor] partners who previously would have not been so keen to engage deeply on a deep strategic partnership with us, to now do so. I’ve already had, along with my team, engagements with some of these partners,” said Raghuram. “What you should look for in the coming weeks, months and years, is that our partnership with the broader ecosystem is as deep and as strong as it is with Dell today.”

At the same time, Raghuram said VMware will keep its “deep and strong” product innovation and go-to-market partnership with Dell for the next five years through a commercial agreement. Raghuram vision for VMware: ‘The leader in multi-cloud computing’

In an in-depth conversation with CRN about his vision and market strategy for VMware, Raghuram said he plans to make VMware the world leader in multi-cloud computing.

He says the vast majority of VMware customers are running their applications in two or more clouds, with many customers applications still residing in the data centre. In the new multi-cloud, hybrid cloud world, Raghuram want VMware to be digital transformation kingpin.

“That really is what I was appointed to do, to make us the leader in multi-cloud computing. That’s really the focus of the next few years,” said Raghuram.

“We are uniquely poised with our anywhere, any app, any cloud strategy, to help our customers transform themselves and accelerate their digital business in this multi-cloud era,” said Raghuram. “The great news is we’re already going down this path, but now we get an opportunity to turbo-charge and accelerate this even further.”

Not a big social media influencer, yet

Raghu Raghuram has a ways to go before he becomes a influencer or major contributor on social media, which is completely understandable as many technology non-CEOs don’t typically pull in huge numbers of followers on platforms such as Twitter and LinkedIn.

Before this week, Raghuram had not posted on Twitter since 2017. His first tweet in years came on Wednesday when he was announced as VMware’s new CEO. In his second tweet, he made a correction of his first tweet.

Raghuram also isn’t too active on LinkedIn, which is more business-oriented and industry-targeted compared with Twitter.

It is key to note that Raghuram will likely now have help from VMware regarding social media activity and posts which should drive more people towards his accounts. Dhawan was previously senior vice president and Chief Customer Officer at VMware where he has helped design the business strategy for emerging multi-cloud and subscriptions offerings as VMware transforms the way customers can consume VMware services. With his broad experience building and scaling subscription businesses and his customer-centric orientation, Dhawan is well suited to help Raghuram evolve VMware into a SaaS and subscription company.

Although Raghuram gains a close ally in Dhawan as the new president, the new CEO will be moving forward without Sanjay Poonen.

Many thought either Poonen or Raghuram would be named VMware’s new CEO if the company hired internally for the position. However, with Raghuram being selected, Poonen announced he would be leaving the company.

“I extend my warm congratulations to Raghu on his promotion to CEO and know he will take the company to new heights,” said Poonen in a statement. “I will be cheering on the company’s success, as I embark on my next adventure.”​ Raghuram will change VMware into a SaaS company

In a bold move, VMware this week unveiled preliminary financial results from its current first fiscal quarter 2022, proving to the market that can successfully lead VMware’s transition. Raghuram is an 18-year VMware veteran with vast experience inside the company both as a technologist and executive leader.

As VMware’s worldwide chief operating officer of Products and Cloud Services, he is responsible for all of VMware’s product and service offerings as well as centralized services, support and operational functions. His tenure and experience at VMware is at the highest level, bar none.

In terms of his heritage, Raghuram was born in India and received a master‘s degree in electrical engineering from the Indian Institute of Technology, Mumbai.

In 1996, Raghuram earned an MBA from the Wharton School of Business. Prior to VMware, Raghuram held product management and marketing roles at AOL, Bang Networks and Netscape.

“I’m really looking forward to taking this company to the next phase of growth along with 34,000 of my best friends in the company,” Raghuram told CRN.