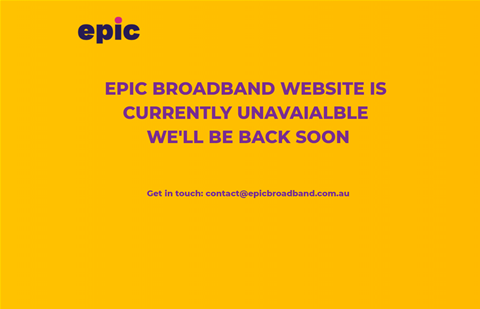 NBN retail service provider Epic Broadband has revealed it has gone into liquidation, according to an advisory from the Telecommunications Industry Ombudsman (TIO).

The TIO said it was advised by the telco of this development and also advised affected customers to find an alternative service provider “as soon as possible”.

The company’s website has also been down, only showing an advisory that the service is unavailable.

In a Whirlpool thread from December 2020, an Epic Broadband representative said the company was “recently launched” at the time and has relationships with Telstra, Vocus, Optus and Ausgrid to connect to NBN points of interconnect (POIs). The company at the time claimed it oversubscribed NBN CVC by at least 30 percent to offer NBN plans of up to 250Mbps.

Vocus confirmed with CRN that Epic Broadband was indeed a previous wholesale customer, and that the company failed to pay its accounts.

“Epic Broadband was found to be in breach of contract with Vocus wholesale in relation to its unpaid account, which is significantly in arrears. Payment is an essential requirement of our ability to provide ongoing network services to our customers,” a Vocus spokesperson told CRN.

“Epic Broadband’s end users will be required to contact a new retail service provider (RSP) to activate a new NBN broadband service. Vocus will facilitate the transfer of affected end customers to their new RSP as quickly and efficiently as possible.”

Grabbing the hybrid cloud opportunity with Lenovo and Azure Services
By Nico Arboleda
May 12 2021
12:55PM