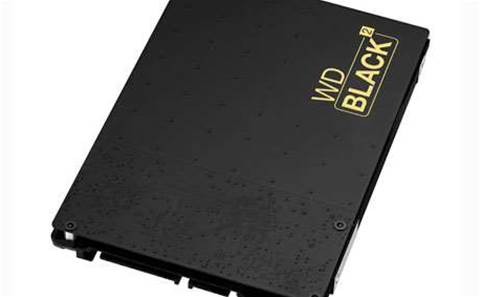 “Our customers told us they like our Solid State Hybrid Drive technology, but our tech savvy users asked for more control of where they store their data,” said Matt Rutledge, senior vice president of WD’s Storage Technology business unit.

The WD Black2 combines a 120-GB SSD based on MLC NAND memory technology along with a 1-TB spinning disk in a single enclosure with a list price of $409.

Both Western Digital and rival Seagate already offer hybrid hard drives that are spinning disks with some flash memory built in to act as a high-performance cache.

While the Western Digital version of that type of hybrid drive is currently only available as an OEM offering to portable PC makers, the Seagate Momentus XT drive, introduced two years ago, is available via retail and through solution provider channels. A 1-TB model with a built-in 4-GB SSD and a 32-MB cache is priced at about $146 at Egghead.

Banda said that in the earlier hybrid drives, the SSD portion was treated as a high-performance cache. "They didn't allow customers to store applications or user data on the SSD part," she said. "Customers don't get the benefit of NAND without being able to access it.

Because the new WD Black2 drive is really two separate drives accessed by a single SATA port, customers can run their applications or store specific data on the SSD part for performance, Banda said.

"The WD Black2 ships as a 120-GB SSD," she said. "But when customers download the software, it reveals the 1-TB hard drive. We had to establish the boundary of the SSD volume, but customers' PCs actually see two separate volumes."