What to expect at Salesforce’s Dreamforce 2018 mega-conference 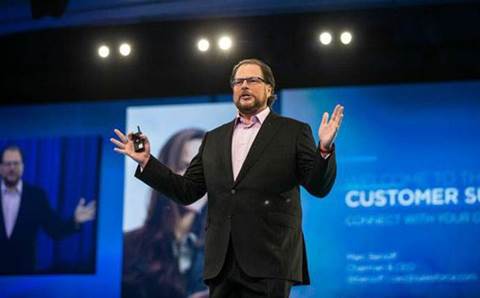 All Eyes On Dreamforce

Salesforce kicks off its mega-conference in San Francisco on Tuesday, and partners and customers can expect an avalanche of news in the days to come about the CRM giant's product direction, leadership developments, technology alliances and channel goals.

Over the past year, Salesforce has pushed hard to throttle its growth and build out its product portfolio and capabilities. The cloud pioneer closed the biggest acquisition in its history, shuffled its channel leadership to focus partners on aligning with industries, and further advanced its artificial intelligence capabilities. Charismatic leader Marc Benioff also adjusted his role at the company he founded and more recently signaled he might be looking for greater influence outside the tech community by buying a vaunted media property.

Here are five developments that Salesforce partners might be talking about after the world's largest tech conference wraps up.

Man Of The Year

Benioff's role at Salesforce, like his influence and prominence beyond the tech world, is also evolving.

In August, Benioff split the CEO job he's held since founding his cloud software company with trusted lieutenant Keith Block to concentrate on loftier issues of vision, innovation and culture.

With his takeover of Time, coupled with his celebrated dedication to social activism and philanthropy, all eyes will be on Benioff's keynote Tuesday for signals of how he plans to exercise his leadership of Salesforce in the coming years.

MuleSoft, the software integration developer Salesforce acquired in May, delivered US$122 million in revenue for Salesforce in the second quarter as engineers and product managers pushed to align the businesses and technologies.

Salesforce pulled the trigger on the US$6.5 billion deal to deliver on the promise of natively connecting apps built on its development platforms with enterprise solutions from other vendors.

Dreamforce will likely be the venue for the formal rollout of the Salesforce Integration Cloud—the product that realises that promise.

MuleSoft's Anypoint Platform, which supports service-oriented architecture, software-as-a-service integration, and API management will become the core component enabling Salesforce partners and customers to secure the flow of data between all systems across the enterprise.

"This was a missing piece of the puzzle. … This is an important part in our customers' digital transformation," co-CEO Keith Block told investors on the company's Q2 earnings call.

The start of the year saw a shakeup in Salesforce's channel leadership ranks as longtime channel chief Neeracha Taychakhoonavudh stepped into the new role of vice president for industries.

Collins and Taychakhoonavudh have been working together since February to encourage partners to better align their practices with seven core verticals that Salesforce is targeting.

Partners may learn more at Dreamforce about Salesforce's efforts to support and incent that initiative through the channel program.

Einstein was the breakout star of Dreamforce 2016, and at last year's conference, Salesforce's AI platform garnered more attention with upgrades and updates.

Over the past year, Salesforce has continued driving its intelligent cloud initiative by building and acquiring new machine learning technologies.

Salesforce also raised its profile in the AI community in August when it open sourced TransmogrifAI, the automated machine learning library used to build Einstein.

Salesforce locked arms with Google at last year's Dreamforce, surprising attendees with a new strategic partnership that would become a crucial component of efforts to scale the business internationally.

Salesforce kicked off this Dreamforce week by making more news on the technology alliance front with a deal to work with Apple on improving the Salesforce app experience for iOS. The two companies will also create new capabilities for developers in the Salesforce ecosystem building native apps for Apple's iPhone and iPad.

Salesforce is a company that relishes partnering with other name-brand technology vendors, having forged close working relationships in recent years with Amazon Web Services and IBM.