What you need to know about Android 5.0 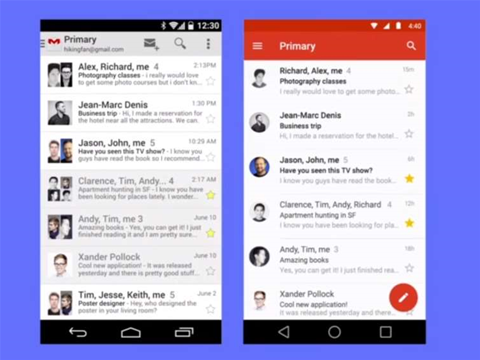 Google has revealed numerous details about Android 5, which it's currently calling Android "L".

Android 5 will feature a new UI centred on a what Google describes as a "Material Design" look, support for 64-bit chips, and clever login authentication via smartwatches.

The L Developer Preview is a "radical new approach to design" said head of Android Sundar Pichai, describing it as the most comprehensive release the company has done.

Matias Duarte, VP of design, said the new Material Design UI is inspired by paper and ink, with bold colours pulled out from images in an app or web page.

The UI has been given "elevation", meaning app designers can "float" items at different heights, with some layered higher than others. "What if pixels didn't just have colour, but depth?" Duarte asked.

Android "L" will also feature animated touch feedback, and use more animation throughout the design.

The system has been created to work across different devices, from tablets to watches. "Your users will already know their way around the app no matter what screen they use it on," said Duarte.

Notifications will be shown on the lock screen, allowing "instant" interactive access to messages right from the screen, rather than forcing you to tap through to the app.

Google showed off a new authentication system. Rather than always require you to login, it judges where it is and who you are, by using your voice, location or a Bluetooth watch. If you're wearing your smartwatch, it doesn't ask for a password; take the watch off, and it requires your security pattern or pin.

New search tools let you search within apps. For example, if you search for a place you had previously viewed in Google Earth, it will give you a link to reopen the app in the right location.

As expected, Android 5 will come with a tool to lock down and wipe a device if it goes missing.

Google hinted at a host of other features in the following slide:

The L preview runs exclusively on Google's new ART runtime, which should offer up to 2x performance boost, the company claimed. All existing app code will work without any changes from developers.

Google promised better battery life and two new tools. Battery Historian helps track battery use more accurately, while Battery Saver is a new setting that can extend time between charges by up to 90 minutes.

Google is making the Developer Preview for "L" available tomorrow so app makers can update their UIs to match the new Material Design look.

Normally, Google names its Android releases after desserts; this time around, it hasn't revealed the name - which was expected to be "Lollipop" - instead sticking with the letter alone.

Grow your software revenue by selling these 5 affordable, essential tools for the modern workplace
By Nicole Kobie
Jun 26 2014
12:51PM