What you need to know about Apple's new Mac Pro 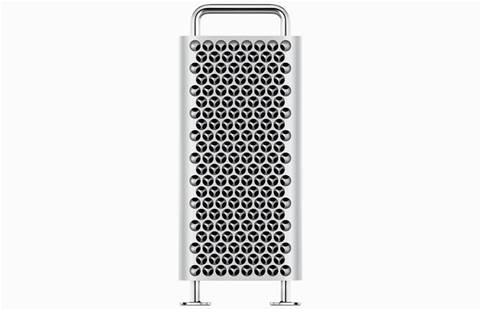 Apple didn't just stick to software announcements at its WWDC developer conference this year. On Monday, the company unveiled a fully revamped version of the powerhouse Mac Pro desktop along with a brand-new display meant to be used with the new Mac Pro, dubbed the Pro Display XDR. The Mac Pro, which is targeted at creative professionals such as video and audio editors, had gone without a refresh since late 2013. While the Mac Pro and Pro Display XDR will offer top-of-the-line specs, both will also come with steep price tags.

Apple CEO Tim Cook touted the new Mac Pro as the "most powerful Mac we have ever created," capable of massive performance through Intel Xeon processors that feature up to 28 cores. The new Mac Pro desktop will also offer up to 1.5 TB of system memory—thanks to a six-channel memory architecture and 12 physical DIMM slots—along with eight PCIe expansion slots.

Apple executives said that one of the key advantages of the new Mac Pro is around its graphics architecture. The new Mac Pro will offer AMD Radeon Pro 580X graphics at a starting point, but the desktop will be configurable with Radeon Pro Vega II graphics—which offer up to 14 teraflops of performance and 32 GB of memory with 1 TB of memory bandwidth. For even bigger performance, the Mac Pro can come with the Radeon Pro Vega II Duo--which contains two Vega II GPUs—or with two Vega II Duos.

Apple's new Mac Pro will feature a stainless-steel frame with an aluminium housing, which can be removed for easy access to the desktop's internal components. The lattice pattern on the Mac Pro housing is intended to provide appealing aesthetics while enabling improved airflow and quieter operation, as well, Apple said. The Mac Pro also includes handles and optional wheels for easier transportation, and Apple will be offering a version of the Mac Pro meant for rack mounting.

In tandem with the new Mac Pro, Apple unveiled a new display for creative professionals intended for use with the Mac Pro. The Pro Display XDR will offer a 32-inch Retina display with 6K (6016 x 3384) resolution, which Apple says is its largest Retina display to date. The Pro Display XDR will also offer up to 1600 nits of brightness and will be rotatable for "portrait mode" with Apple's new Pro Stand, the company said.

The new hardware introduced by Apple at WWDC 2019 won't come cheap. Apple said the new Mac Pro will have a starting price of US$5999. The desktop will be available for ordering in the fall.

Meanwhile, Apple's Pro Display XDR will have a starting price of US$4999, and the Pro Stand will be sold separately for US$999. The display and stand will both be available for ordering in the fall, as well.

Eliminating departmental friction within MSPs
By Kyle Alspach
Jun 4 2019
10:06AM